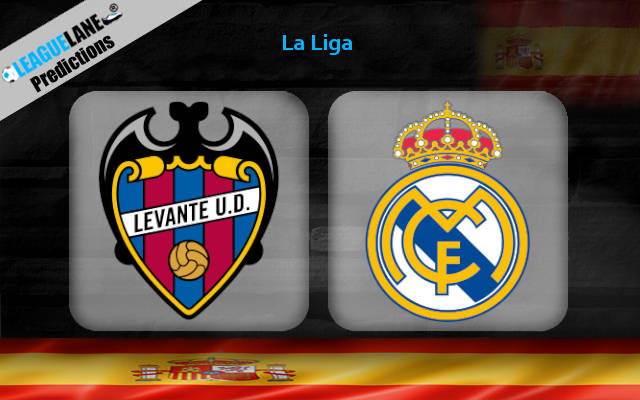 The Los Blancos have been the best team in Spain for the past several decades along with Barca, and they have a great h2h record against Levante. Carlo Ancelotti’s men are determined to get their lost title back, and the logical pick for Sunday is Real Madrid to win.

They had narrowly missed out on the title the last season, as arch-rivals Atleti secured the crown with a two-point lead. But the Royal Whites could find solace in the fact that they were in the running till the very last match-day, despite all the problems they were facing.

They had scored the second-most number of goals through the campaign, and had the second-best offense. Do also note that they had lost just four times all through this run.

In the summer, the team did witness some major names leaving them, but Carlo Ancelotti made a return as well – the gaffer who made the La Decima possible.

Surely, the Los Blancos are targeting nothing but the title in the La Liga this season.

In the meantime, Levante had to settle for a 14th place finish the last campaign in the Spanish top flight, and they had recorded a total of just nine wins in the process. Do also note that they had let in 57 goals in the campaign, while the dead-last placed Eibar had capped it at 52.

By the looks of things, expect a win for Real Madrid this Sunday.

Levante were held to a 1-1 draw by Cadiz the last match-day. In the meantime, the Royal Whites recorded a 1-4 win against Alaves.

Going on, Ancelotti’s men are favorites to lift the title this season, and they have already made a great start.

They also have a great h2h record against this rival over the years, whereas Levante were winless in 24 of their past 30 overall games, as well as in 14 of their preceding 17 appearances at home.

By the looks of things, expect a thorough win for Real Madrid.

However, they are yet to be used to the lack of Raphael Varane, and Sergio Ramos at the back, and moreover they are on the road. Likely, count on Levante to find the back of the net at least once.