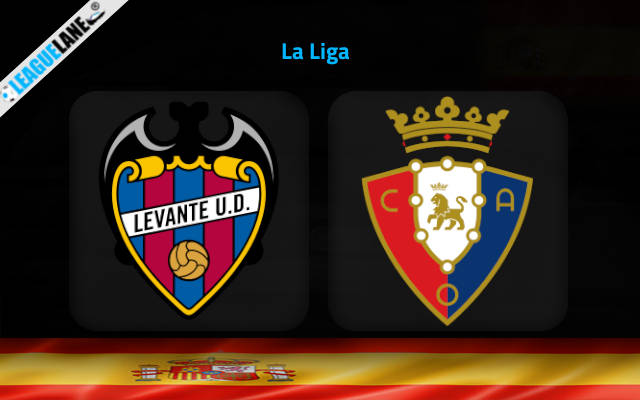 Osasuna had a great start to their season, and even went on a winning streak at one point during the campaign. However, lately they have been on a poor stretch of performances, and desperately need a huge win to swing the momentum back in their favor.

Fortunately, they have a great opportunity coming up. They are pitted against the worst team in the competition – the dead-last placed Levante, who are yet to win a single fixture this campaign.

By the looks of things, count on the desperate Osasuna to secure this much-needed win.

Levante lost 3-1 on the road the last match-day, against Betis. They are also on a 16-fixture winless run, and had also lost seven of the past ten games.

They had also conceded two or more goals in seven of the preceding ten matches, and they even had failed to score in six of their last nine home appearances.

Going on, they had conceded two or more goals in five of the last eight home games, and they have a total of two wins at home this whole 2021.

On the other hand, before going through a tough schedule consisting of some of the best teams in the league, Osasuna were in fine form. They had scored goals in plenty in the process, and they also have a great h2h record against this foe over the years.

Considering these observations, expect a win for the determined Osasuna this Sunday.

Tips for Levante vs Osasuna