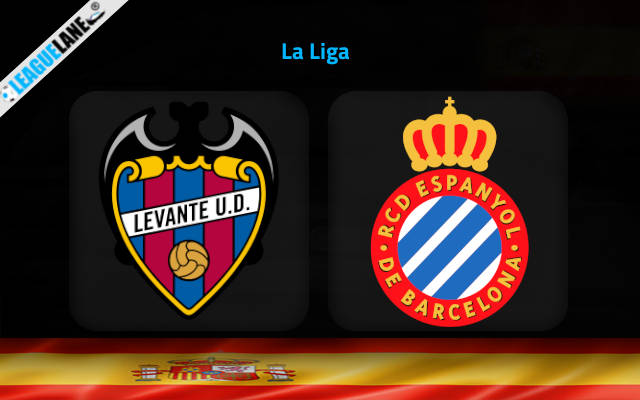 Levante have been the absolute worst team in the whole Spanish flight this season, and are appropriately placed bottom-most in the table.

They have registered a total of just three wins all through the campaign, and with just 11 match-days remaining, they need a surplus of at least eight points to make it out of the relegation zone.

Meanwhile, Espanyol are placed comfortably in the mid-table, and their objective would be to secure a top-half finish. They will surely consider this upcoming fixture an opportunity, since the match-up is against the dead-last placed team in the table.

By the looks of things, anticipate Espanyol to have the upper hand.

However, Levante have recently been desperate, and as a result, they have marginally improved their form as well. It goes without saying that they will be trying their absolute best this weekend as well, and though it might not end up well for them, chances are high that the game will turn into a goal-fest.

Levante lost 3-1 on the road the last match-day, against Athletic Bilbao. They had also lost eight of their past twelve overall fixtures, and their only two wins at home since last March, had come against minnows Mallorca, and Elche.

On the other hand, Espanyol had managed to register a 2-0 win at home the past game week, against Getafe. They were also unbeaten in three of their last four overall fixtures, and they have lost just two league matches on the road in the past three-month period.

Judging these observations, expect a win for Espanyol this Saturday.

Going on though, the desperate Levante will try out an all-out-attack mode, in an effort to avoid relegation. And this will possibly lead to goals coming in plenty.

Tips for Levante vs Espanyol