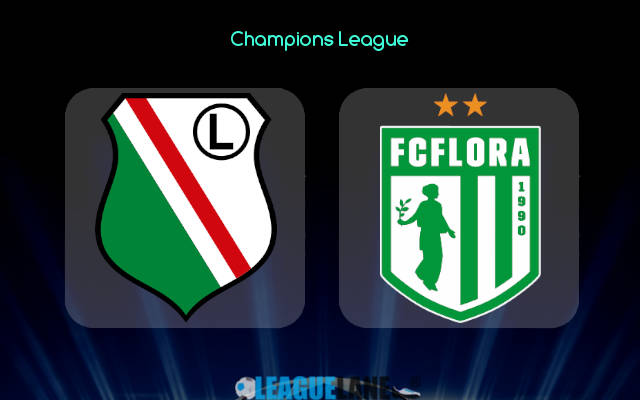 Legia Warsaw play host to Flora in the first leg of their UEFA Champions League second qualifying round tie on Wednesday at Stadion Miejski.

The Polish champions are massive favorites against the Estonians both on the evening and over two legs. They had luck with the draw which gave them the easiest possible rival for this stage of the competition.

We have reasons to expect a super serious approach from the hosts who have rarely had a chance to even reach the playoffs of the elite continental competition in the last decade. If you combine such an approach and motivation with the obvious gulf in quality between the two teams, we can only expect a confident victory for the hosts on Wednesday evening.

Legia even faced a much more dangerous rival in the first qualifying round, but they showed strength bagging five goals in two wins over Norwegian champions Bodo/Glimt. Luquinhas and Mahir Emreli were especially inspired in a double-header against the Norwegians and they should lead the line here against Flora as well.

The visitors have never managed to jump above the first hurdle in this competition. They were stopped by Lithuanian Suduva last year (on penalties after a 1-1 draw in the regular time).

However, Flora Tallinn took advantage of the super-easy draw in the UEFA Europa League, as they eliminated the likes of KR (from Iceland) and Floriana (from Malta) to reach the playoffs where they fell 3-1 at Dinamo Zagreb.

The two teams did not have the opportunity to take on each other in the past.

This should be a one-way street from the very first minute to the end. Legia have regularly disappointed their fans in Europe lately. This is their chance to shine and we sincerely doubt they will let it go.

Flora did storm past Maltese Hibernians in the opening qualifying round but they have nothing to hope for here against Legia. The home win by at least two goals difference is a banker bet at the odds of 1.83.