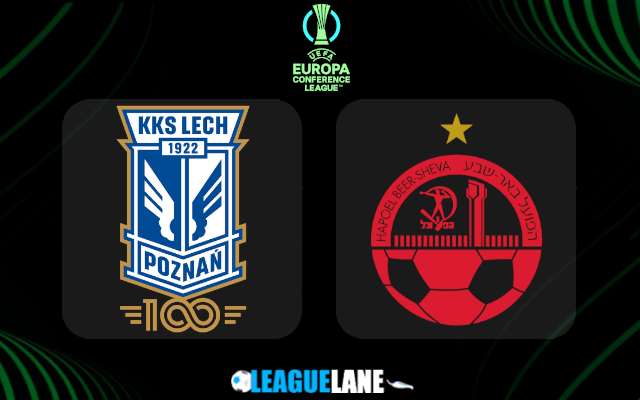 Lech Poznan will take to the pitch with visiting rivals Hapoel Be’er Sheva at Stadion Miejski in the Europa Conference League fixture on Thursday.

Hapoel Beer Sheva were the runners-up of the Israel Ligat Ha’alin the last season – missing out the title for just 8 points.

They were expected to have a racing start to the fresh campaign as well. However, the team failed to meet the expectations as the team started off the season in a worrying fashion.

However, they seems to have improved their form in the league lately. But the spirits gained through the domestic positives did not help them to do the same in their ECL group stage fixtures. They drew and lost one apiece to sit at the 3rd spot of Group C as of now.

This week they are pitted against an in-form Lech Poznan, who have won the previous round against Austria Vienna with 4-1 ft score at home.

They will be facing Hapoel Be’er Sheva at the same venue. Thus, we can expect them to enter this tie with highest of spirits.

By the looks of things, expect a pleasant day for the local supporters on Thursday at Stadion Miejski.

The Railwayman is currently on a 5-fixture unbeaten streak in front of their home crowd and had gone on a separate 4-fixture winning streak in the process.

Do also note that they had scored a total of 6 goals in their past 3 home fixtures. On top of that Lech Poznan own a good head to head form against this opponent for the past several years.

Considering all these observations, we expect a victory for the home side Lech Poznan against this Hapoel Be’er Sheva outfits on Thursday.