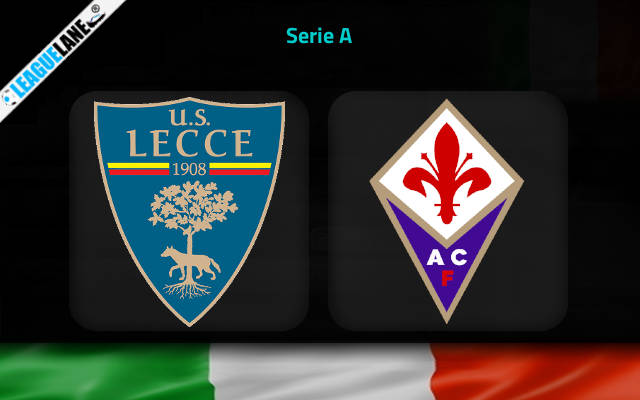 Lecce and Fiorentina will drop the curtain on Gameweek No 10 in Italian Serie A on Monday evening when they take on each other at Stadio Comunale Via del Mare.

Interestingly, the bookies favor the visitors to claim the spoils although there are not many factors points towards such a scenario going into the tie.

First of all, the two teams are only separated by two points in the bottom half of the Serie A standings.

Moving forward, Lecce have only lost one of four league games on the home patch this term (to Inter Milan), while I Viola have claimed no more than a single point in four away outings.

Also, Lecce will enter this game in much higher spirits after going unbeaten in three subsequent matches before a narrow loss to Roma last Sunday at Stadio Olimpico.

Even in that game in the capital, Marco Baroni’s troops offered a great performance, pushing the Romans to the limits despite having a main sent off midway through the first half.

Fiorentina, on the other side, lost three of the previous four league outings, including the 0-4 catastrophe seven days ago against Lazio at Stadio Artemio Franchi.

It is also worth noting that I Viola had a fixture against Scottish Hearts in the UEFA Europa Conference League on Thursday.

Vincenzo Italiano’s men are not quite used on playing twice a week on a regular basis and this may also be another reason for the drop in form in the recent games.

Fiorentina have not been pulling up any trees on travels this term with three defeats and a draw in four league outings away from home.

Since we did not quite see goal fests in the recent H2H history between these rivals, we are very much tempted by the 7.00 odds offered for Lecce to win & Under 2.5 goals FT pick here.