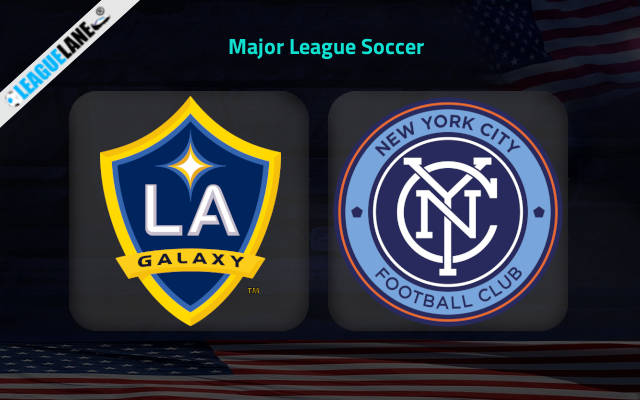 They travel all the way to the west, 2,800 miles across the United States, to take on LA Galaxy in the opening round of the 2022 campaign in California.

NYCFC had extraordinary playoffs run in late 2021. It culminated with the victory over Portland Timbers away at Providence Park.

Ronny Deila’s men showed great team spirit and mental strength to win the penalty shootout despite conceding the 94th-minute equalizer on the occasion.

NYCFC did not change their squad significantly in between the two season and they will enter the 2022 campaign as one of the main contenders to defend the MLS Cup crown.

LA Galaxy, interestingly, did not change a lot either, despite failing to reach the playoffs for the second year running.

Greg Vanney is still the head coach despite failing to achieve more than the eighth position on the west in the previous term.

He has managed a notable signing in the like of former Juventus star Douglas Costa who could be a fantastic addition if he successfully links up with Javier Hernandez up top.

This first round clash will give us some insight into the actual capabilities of this LA Galaxy roster as they are about to lock horns with one of the strongest teams in the country on Sunday afternoon.

New York City have already been in competitive action this month, storming past Costa Rican side Santos de Guapiles 6-0 on aggregate in the last 16 round of the CONCACAF Champions League.

LA Galaxy have played some high-scoring thrillers in their pre-season friendly against Vancouver Whitecaps (a 4-2 loss) and D.C. United (a 2-2 draw) which is why we will take the 1.95 odds offered for the Over 2.5 goals FT & Both Teams To Score pick here.