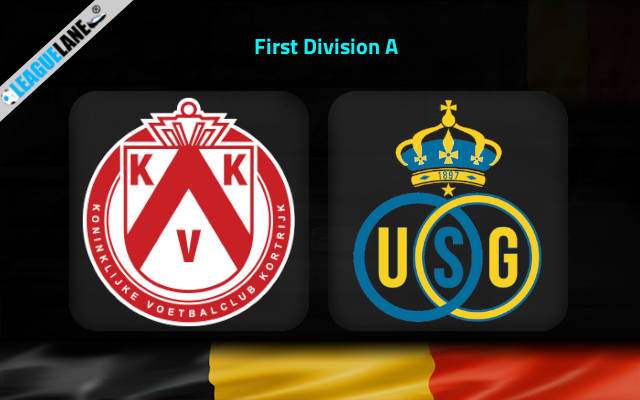 Union Saint-Gilloise failed to break the deadlock pas the relegation-threatened Eupen in the previous round of Firsst Division A.

The gap between them and the second-placed Club Brugge has thus been reduced to seven points at the top of the standings.

The last season’s First Division B champions will be looking to return to winning ways straight away in the 30th round of the competition as they travel to Guldensporenstadion to battle Kortrijk on Saturday afternoon.

Union Saint-Gilloise do not want to complicate their position in the battle for the title. The good news for head coach Felice Mazzu is the return of his top scorer Deniz Undav who served his red-card suspension last weekend.

We saw how much Mazzu’s men struggled to get things going offensively last weekend against the likes of Eupen. With the German talisman back in the squad, it should be a completely different story here against Kortrijk.

The visitors will be heavy favorites to claim the spoils here since Kortrijk have lost five of the last six First Division A affairs.

The latest of their failures came last Sunday when they lost 2-0 away at Genk. Kortrijk did demolished Zulte-Waregem 5-0 in their previous home fixture but this win was rather an exception to the rule as it came after a streak of three consecutive home defeats in the competition.

Union Saint-Gilloise have shipped only one goal in the last six league matches. They are up against the team that lost five of the last six First Division A outings and they have dominated this matchup historically.

The away win is thus by far the most reasonable betting option here. You can back it at the 1.66 odds.