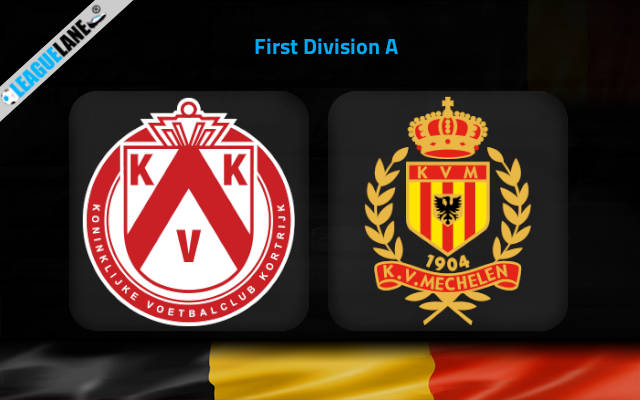 Kortijk welcome Mechelen at the Guldensporen Stadion on Friday evening in what promises to be an encounter that will be worth watching as both sides battle it out to claim glory.

The home side currently sit on 5th in the league table as they have claimed 9 points out of 15 winning 3 and losing 2.

Kortijk come into this fixture from a crucial 2-0 victory away from home over Sint-Truidense V.V. after consecutive defeats against Union Saint-Gilloise and Genk with a 2-0 and a 2-1 score line respectively.

In their recent victory over STVV, Faiz Selemani and Habib Gueye got on the score card in the 1st and 93rd minute of the game which sealed all three points for the home side.

On the other half of the pitch, Mechelen come into this fixture after a 3-1 victory against Union Saint-Gilloise. The away side currently sit in 10th in the league table after losing thrice and winning twice out of their 5 games in the league and they will be keen to get 3 points to climb up the ladder and be safe from relegation with points on the board.

In their recent fixture, against Union Saint-Gilloise, Hugo Cuypers, Marian Shved and Nikola Storm got on the scoresheet in the 13th, 55th and 77th minute respectively.
The away side will be hoping that their forward line will be able to produce the required goods in front of goal while their team is on the attack.

The home side will be very keen on getting 3 points in this fixture as they will be hoping that they take the maximum benefit of their home crowd.

However, it will be a tough task for them to secure a victory as Mechelen also have a lot to fight for. Hence, we see an evenly played out draw in this fixture at Full-Time.

We see good value where both teams are not going to score at 2.20 odds. As a result, placing a bet on this can pay up huge dividends.