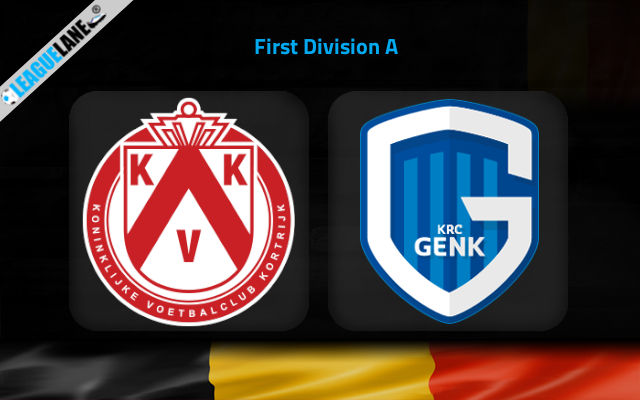 Wout Vrancken is doing miracles with Genk this season. The team are as many as ten points clear at the top of the First Division A standings going into the 18th round clash against Kortrijk on Monday afternoon.

Genk won 15, drew 1, and lost just 1 of 17 league outings in a fairytale run in the first half of the season.

They haven’t been champions since the 2018/19 season and we can already hear the festive music around their Cegeka Arena.

Genk continued their spectacular form with by eliminating Anderlecht in the last 16 round of Belgian Cup last Wednesday.

It was a tight affair which was decided by Joseph Paintsil in the extra-time. If we count the two mid-season friendlies against Heerenveen and Metz, as well as cup ties, Genk will go into this match on the back of 14 consecutive wins.

The visitors boast the best attacking and defensive records in the division at the same time with a brilliant goal difference of 45-15.

Nevertheless, Vrancken and his troops will need to be extra careful on Monday against Kortrijk because their rivals have shown a completely different face on the debut of the new manager in the last week’s cup game.

Kortrijk destroyed OH Leuven 1-3 on the road in the first game in charge for the former AS Eupen manager Bernd Storck. Kortrijk registered nine shots on target on the occasion, allowing their counterparts just one at the opposite end.

Kortrijk looked great defensively in the 1-3 win over Leuven six days ago in Belgian Cup. They will park the bus here and we believe they have what it takes to keep it a tight and low-scoring affair under new manager.

Genk played 120 minutes five days ago against Anderlecht. They might need some time to get up to full speed after the World Cup break. We will thus back Genk to win & Under 3.5 goals FT pick as the main option at the 2.62 odds.