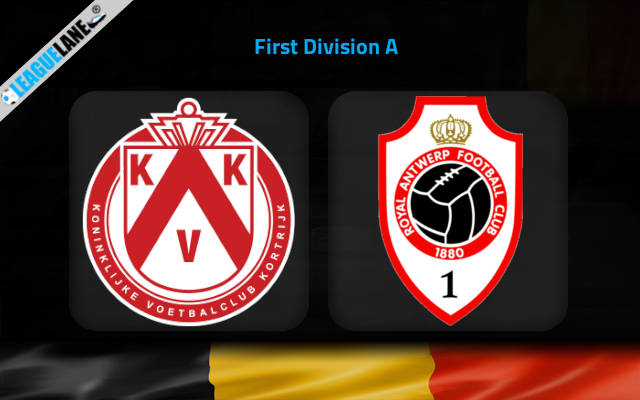 Kortrijk host Antwerp in an exciting top-half clash in the 21st round of Belgian First Division A on Sunday afternoon at Guldensporenstadion.

The hosts enter the tie in the highest of spirits after a run of three consecutive league wins. They have kept their net untouched in each of the last two fixtures against Oostende and Seraing (two straight 0-2 wins on the road).

Karim Belhocine’s men moved up to the seventh place in the First Division A standings as a consequence.

They will be hoping to maintain such a positive streak on Sunday afternoon against Antwerp. It will be easier said than done, though, knowing that the visitors hold the third position in the league table right now.

Antwerp won four of the last six fixtures across competitions. They have also produced a great defensive showing in the last weekend’s 1-1 draw at Genk.

Danish manager Brian Priske was thrilled to see his men limiting the likes of Genk to just two shots on target on the occasion.

Antwerp also kept three clean sheets in the last six outings across competitions. Last but not least, they were not in action in mid-week unlike Kortrijk who had a tough fixture against Anderlecht in the Belgian Cup quarterfinal on Thursday evening.

Both Kortrijk and Antwerp looked solid defensively of late. The hosts kept back-to-back clean sheets in the wins over Oostende and Seraing, while Antwerp limited Genk to just two shots on target last weekend on the road.

Three of the last five head to head games ended in a 1-0 scoreline which is why we have to see the value in backing the Under 2.5 goals FT pick at the 2.10 odds. We also fancy Antwerp to win at the 2.40 odds.