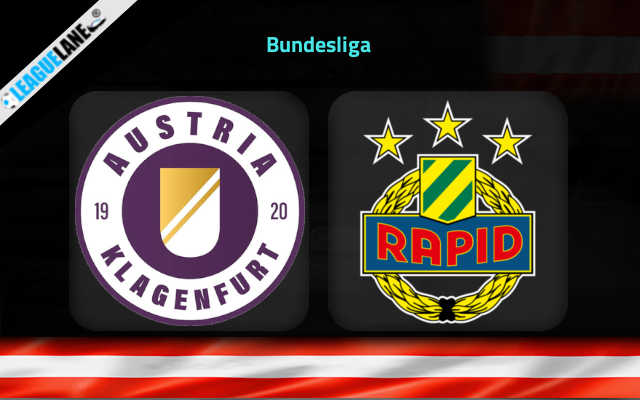 Austria Klagenfurt are at the bottom of the league failing to secure a win since the last two games. They have been reduced 15 points due to competition rule and has secured a win only once from their last 6 games across all competitions.

Rapid Vienna is just above them, winning back to back league fixtures while on a 3-game unbeaten run.

Both teams share the same points and this upcoming fixture at Wörthersee Stadion will certainly set them apart as the Green-Whites will be traveling this Sunday.

The home side is at the last spot at 6th on the standing with 15 points from 23 games. They won 7 times in the league while drawing on 9 and losing on 6 other occasions. They scored 31 in total while conceding a sum of 33 which shows some room for improvement in defense is needed.

Austria Klagenfurt’s last game was this h2h encounter where they lost by 0-3 at the hands of Rapid Vienna. They have been scored against on 5 of their previous 6 games, giving up 11 goals along the way.

On the other hand, Rapid Vienna resides just above them at the 5th position on the table with only 15 points. Of the 22 matches played, they won on 8 games while drawing and losing 7 matches each. Their total goals to conceding ratio stands at 35:31 thus far in the league.

The visitors are on back to back league victories over Tirol and Austria Klagenfurt maintaining a cleansheet on both. Ferdinand Feldhofer’s men have managed to stick the ball in the net a total of 10 times throughout their latest 6 matches. The total of number goals that they have conceded during the same comes to 7.

We feel that a repetition of last week is highly probable as the visitors are undefeated in their last 4 games on road. Even though the hosts lost only once at home, they drew around 54% of the matches played at Wörthersee Stadion this season.