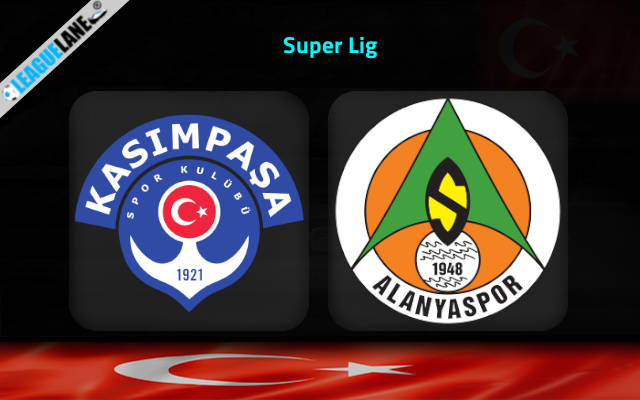 Kasimpasa vs Alanyaspor Predictions and Free Tips from our expert tipsters when the teams go head-to-head in Turkish Super Lig on Wednesday, 4 January 2023

Kasimpasa are hanging by a thread over the relegation cut-off at the moment, and their immediate objective would be to put some safety cushion of points under them. But they are on a long winless run as of now, and momentum clearly is not on their side.

Alanyaspor will be eager to make full use of this opportunity. They are on a great streak of results – especially so after the World Cup break. Not just that – but their offense has been in full swing as well.

The two teams played out a high-scoring draw the last time they met each other on the pitch. The match-up took place in February of 2022, at this same venue, and the final scoreline was 2-2.

Goals have come in plenty almost whenever these two teams locked horns – and especially so in recent times. In fact, eight of the past nine encounters had three or more goals.

Who will win the match between Kasimpasa and Alanyaspor?

Alanyaspor are the favorites to deliver the three points this Wednesday. Not only are they in great form, but they have a superb opportunity coming up to break into the top tier of the table. They will surely turn up with intent against their struggling counterparts.

To put it precisely, Kasimpasa are the only team in the entire league to have remained winless in the past five match-days.

Alanyaspor are in great from – particularly their offense, and their opposite number has not been hot as far as their defense is concerned. A high-scoring affair is expected.

Chances are low for that to happen, considering the poor offensive record of Kasimpasa. They have actually scored the least number of goals in the current edition of the Super Lig.

The visitors are unbeaten since the league resumed, and are scoring goals in plenty. And to further make matters easy for them, Kasimpasa are the worst team in the competition based on recent record. As such, expect a victory for guests Alanyaspor.

As far as goals are concerned, the visitors are in red-hot form offensively. They managed to score two or more goals in every single match-up after the World Cup break. Anticipate goals in plenty.