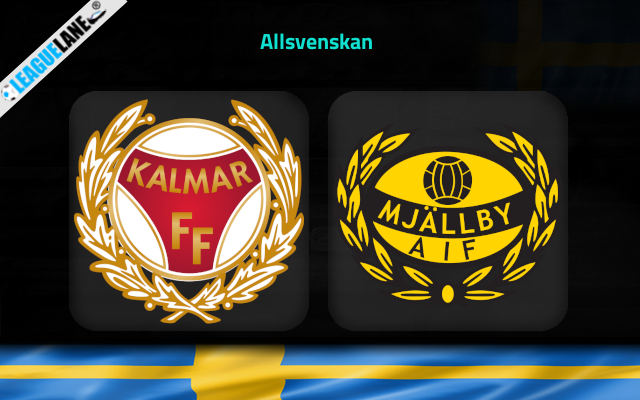 Kalmar and Mjallby have claimed a grand total of one point combined in four Allsvenskan rounds in July. Can either team terminate such a horrendous spell of form in their head to head encounter in the 13th round of Allsvenakn on the first day of August?

Neither Kalmar nor Mjallby have been pulling up any trees since the restart of Allsvenskan after the EURO 2020 break (which lasted during June).

While Kalmar did take a point, courtesy of a 1-1 draw at Varbergs almost a month ago, Mjallby lost all four of their league matches in July.

Both outfits can put some portion of blame to a tough schedule given their rivals includes the likes of AIK and Djurgarden on one, and Norrkoping, IFK Goteborg, and Malmo on the other side.

When you take a closer look at these two outfits, the first thing you’ll recognize is the lack of a proper attacking potential.

Indeed, both teams have a higher number of matches played than goals scored. Kalmar notched 11 goals in 12 outings, while Mjallby managed to find the back of the net just 9 times in 12 games (the second worst attacking record in the division).

Kalmar will go into this off the back of two straight losses without a goal scored. Believe it or not, they had a grand total of 1 shot (all shots count in this category) in the entire match against Djurgarden last weekend.

Overall, Kalmar were the more successful side in this matchup historically, but they are winless in the last three meetings with Mjallby.

As a matter of fact, Mjallby won two and drew one of these three games along the way.

The teams met each other in a pre-season friendly in March this year when Mjallby picked up a 0-2 victory.

Both outfits are struggling badly offensively these days and we can’t see anything other than a low-scoring contest when they meet each other in a very important match for both managers and their respective destinies.

The Under 2.5 goals FT is by far the best betting option here and you can take it at the odds of 1.66.