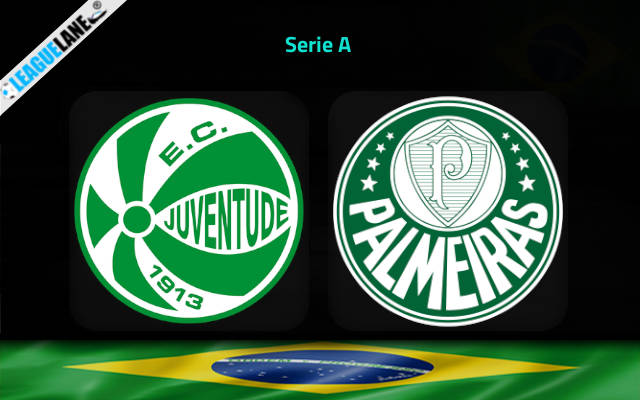 Juventude has found their first win of the season in the last match. This brought an end to a cold streak which had lasted for five matches. From the last six matches, the team has got one win, three draws and two losses. Their performance has put the team fourth from the bottom of the league table as the first team on the relegation zone. They have got six points from their matches so far.

Juventude played their last match against Avai. Juventude scored two goals in the match while Avai could score only one, ending the match in a win for Juventude with 1-2 FT score.

Palmeiras played their last match against RB Bragantino. Palmeiras scored two goals in the match while Bragantino could score none. The match ended in a win for Palmeiras with 2-0 FT score.

Juventude has had a rocky start to their season. They have won only once in the last six matches. Palmeiras is unbeaten in the last five matches as well.

Juventude has failed to secure a win in the home matches this season. From the three matches played in the home ground, the team has got two draws and one loss. Palmeiras has played only two away matches, and both ended in draws.

Looking at the records, Palmeiras seems to be the better team of the two and has more chance of securing a win than Juventude. Both teams have scored in most of their recent matches. So, we can expect both teams to score in the matches as well.