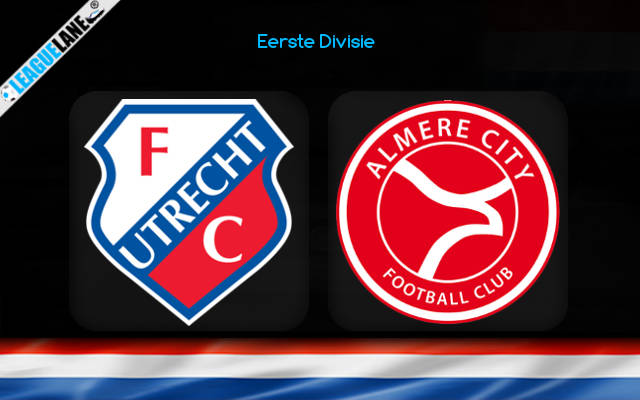 Almere City is second from the bottom after registering their 8th loss in the preceding fixture. They have the highest number of draws in the league tied with Helmond who are at the rock bottom. Jong Utrecht lost back to back league matches and are highly inconsistent in the league. They lost 7 out of the past 9 league games while winning twice of them. With 5 points and 4 places apart, Jong Utrecht will be hosting the visitors at Sportcomplex Zoudenbalch for the upcoming 29th Round of Eerste Divisie.

The visitors are at the 19th spot on the standing with only 23 points from 28 games. They won only 5 times in the league while drawing on 8 and losing on 15 other occasions. They scored 39 in total while conceding a sum of 57 which is the second worst in Eerste Divisie.

Almere City got defeated in their last game at the hands of Venlo by 0-1. Throughout their 6 previous matches, Alex Pastoor’s squad have bottled up 5 times, yielding them a goals per game average of 0.83.

On the flip side, Utrecht Reserves resides at the 14th position on the table with only 28 points. Of the 28 matches played, they won 8 games while drawing on 4 and losing on 16 other occasions.

The hosts suffered their second consecutive loss against Oss by 1-4, the previous week. It has not been often in recent times that Jong Utrecht have shown defensive steel. They have failed to prevent opponents from scoring in 5 of their previous 6 clashes, letting in 13 goals on the way.

Coming into this contest, the hosts are left without a victory over Almere City in their previous 3 matches in the league. We also anticipate a win for the visitors, as Jong Utrecht lost 71 % of the games played at home this season while the visitors are decent on road.