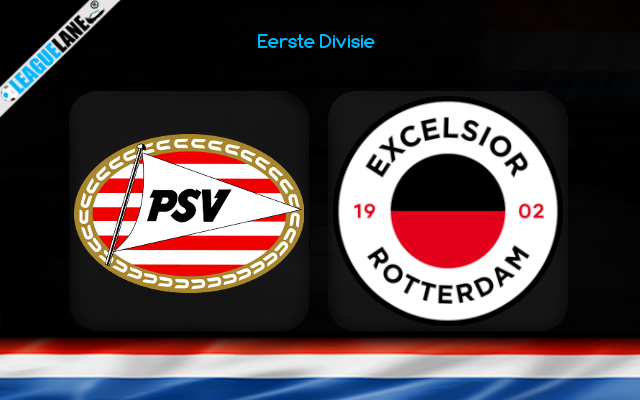 Jong PSV will be hoping to make it four subsequent games without a defeat, following a 1-4 victory at Venlo, 5-1 victory to Almere at home and 0-0 draw at Parma.

They are up against one of the best attacking line in the competition, Excelsior, who has the capability of bagging a positive outcome here.

Jong PSV hosts Excelsior in the 23rd round of Eerste Divisie on Friday at De Herdgang.

Excelsior is on a firecracker of form since the beginning of this Eerste Divisie. They got slowed down in a couple of outings recently. They shared spoils in their last match against Graafschap.

However, they are unbeaten for 8 games and will be hoping to extend that run when they meet Jong PSV.

Jong PSV has a seesaw of form at home patch. They won, drew and lost two apiece. Four of those matches saw goals from both sides. Therefore, in defense they have some weaknesses to address.

When they face the best attacking side of this season, those goal conceding stats will count much. At home, they leaked 15 while scoring 21. Overall it seems to be fine. But recently they have been leaking goals which is not good.

On the other side, Excelsior emerged as the most successful team on road in the league so far. They have been scoring goals for fun, touching opposition’s net for 27 times in 11 games.

Their impressive form on travels and the head to head records are enough to predict a conclusion in favour of Excelsior.

We are backing the away side to score a couple or more. We also expect at least one from the home side too.