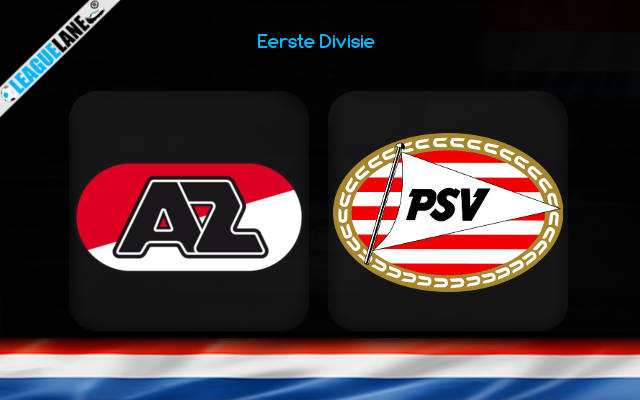 Jong AZ Alkmaar vs Jong PSV Eindhoven Predictions and Free Tips from our expert tipsters when the teams go head-to-head in the Dutch Eerste Divisie on Monday, 12 December 2022.

Jong AZ Alkmaar is restarting their Eerste Divisie campaign after a month’s break and they try to build up on a four-match unbeaten streak of 2 wins and 2 draws. They are sitting at 7th in the table, thanks to points earned from a strong home record with 5 wins, 2 draws and 1 loss from 8 matches.

Jong PSV on the other hand a hot and cold season, though they went to the break ending a three-match winless run with a surprise 2-1 win over the reserve squad of Ajax. Currently ranked 14th in the league, this youth team managed to make life difficult for their opponents while playing away from home. They lost just 1 of the last six road games.

Who will win the match between Jong AZ Alkmaar and Jong PSV Eindhoven?

Based on the recent home form, Jong AZ are looking good to bag a narrow win in the matchup against Jong PSV on Monday evening. Interestingly four of their five wins at this ground this season came with a 2 or more-goal margin.

Jong PSV managed to win just once on the road all season and their trend of holding teams to stalemates may come to an end on Monday.

We are backing over 2.5 goals are the top pick for this Eerste Divisie fixture on the basis of strong scoring form of both teams. The hosts failed to score just once at home all season while the visitors found the back of the net in every road game in current campaign.

Meantime, brave punters can back home win priced at 2.20 odd, the reasons for this pick are clearly explained in the previous section.