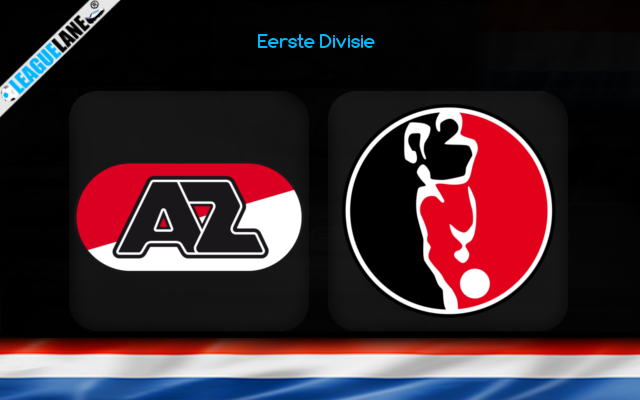 Jong AZ Alkmaar vs Helmond Sport Predictions and Free Tips from our expert tipsters when the teams go head-to-head in the Dutch Eerste Divisie on Monday, 23 January 2022.

Helmond Sport have managed to make a thread of three unbeaten games, but are still lagging behind in the table. They sit fourth from the bottom in the standings.

Meanwhile, Jong AZ Alkmaar have been recording inconsistent outcomes lately. However, they won two of the past three league fixtures and have managed to climb into a spot inside the safe zone.

The past two overall wins were evenly split, with two each for both sides. However, the reverse fixture finished in a 1-3 win for Jong AZ Alkmaar.

At this venue, they have only met five times. Helmond won two, drew two and lost one against Jong AZ Alkmaar.

Who will win the match between Jong AZ Alkmaar vs Helmond Sport?

The current form of both teams suggests a result in favor of Jong AZ Alkmaar. Thus, we expect a win for the hosts on Tuesday.

More than half of the matches played by these two teams saw the landing of over 2.5 goals ft. Still they both have the least number of over 2.5 goals recordings. The high-scoring character of Eerste Divisie inclines us to back the option.

The defensive side of both sides have been leaking goals consistently. Moreover, three of the past five h2h matches at this venue saw the landing of both teams to score option. Therefore, expect goals from both ends here.

We therefore like to place Jong AZ Alkmaar to win at 1.70 odds as the main betting option. For the second tip, we like to place the over 2.5 goals bet at 1.73 odds.