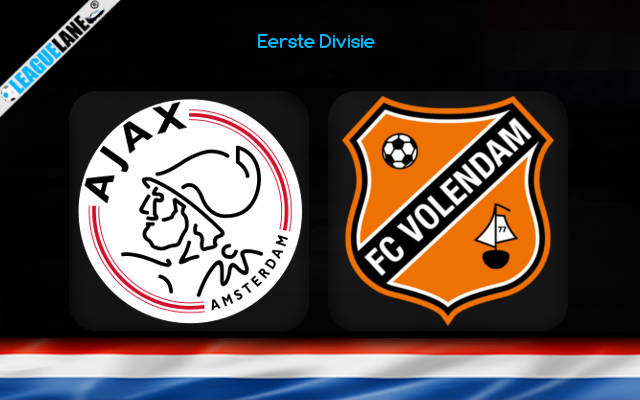 Volendam is looking to further add to their reputation as the heen-en-weer club (“the back-and-forth club”), as they are looking to achieve their 10th promotion into the Eredivisie.

They are set to travel to De Toekomst this Friday to take on Jong Ajax, who are having a much better season in comparison to their 16th place finish last season in the Dutch second division. Read our Preview, Predictions, and Betting Tips with Analysis here.

FC Volendam were knocked out of the KNVB Beker by Emmen in a 3-0 scoreline at home towards the end of last month. They were unable to get the better of the side once again at home in the league in their most recent fixture as they were held to a 2-2 draw.

Disregarding their record with FC Emmen the club has arguably been the best side in the division with their only loss coming in matchday 2 of the league. They are currently top of the league 2 points clear of their nearest rivals.

Ajax reserves on the other hand have recovered well from a rather poor start to the season and are climbing their way up the table gaining points on a consistent basis. They are currently in 6th position with 25 points across their name.

Both teams have added 13 points to their tally from their last 5 league games. The hosts have registered 4 consecutive wins at home while the visitors are undefeated on the road, since the mid of April.

With very little to separate the sides, I have backed Volendam to come away with 3 points based on their performances over the season and a much superior h2h record.

A goal-fest is seen more times than not when these teams meet. This fixture will be of no exception as the teams have scored the most and 3rd most goals in the division.