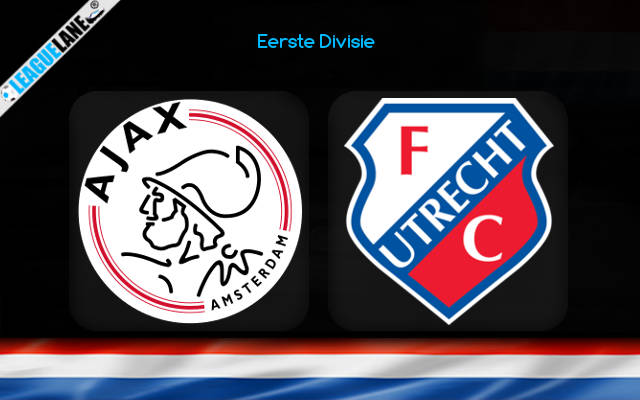 Ajax’s and Utrecht’s youth teams will meet each other in the 17th round of Eerste Divisie on Sunday afternoon at Sportpark De Toekomst.

The hosts head into the tie as huge favorites and for a genuine reason. Jong Utrecht have been the worst team in the competition after the opening 16 Matchdays.

The visitors firmly sit at the very foot of the standings with 11 defeats in 16 outings. They also own the joint-worst attacking record with 13 goals scored and one of the weakest defensive records in the league with 28 goals conceded.

Interestingly, Jong Ajax have also allowed 28 goals so far in the campaign, but they hold the 10th position in the table thanks to the fact they have bagged 30 at the opposite end.

The hosts are unbeaten in three successive league games, a run that includes a 3-.4 win at Dordrecht and a 4-4 stalemate against Den Bosch. Both teams scored in ten of Jong Ajax’s previous eleven matches in the league.

Another reason speaking heavily in the favor of the hosts is Jong Utrecht’s dreadful road form.

The team led by Bosnian manager Darije Kalezic took just one point in eight away games this season. They have a dismal 7-20 goal difference away from home.

This should be an open game packed with chances at both ends. Knowing how poor Jong Utrecht have been on travels, we simply have to take the Jong Ajax win & Both Teams To Score pick at the odds of 2.75.

The Over 3.5 goals FT pick is another well-worth-backing option at the 2.10 odds, while we will also take the 19.00 odds longshot, backing the hosts to win 3-2 here.