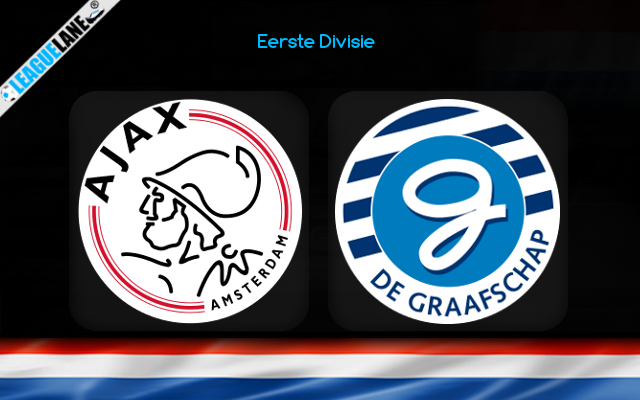 Jong Ajax are secured inside the safe zone of the table. They are currently at the 7th spot with a total of 62 points. With just one game left to finish for each of the Eerste Divisie outfits, they doesn’t have any challenge related to their position.

They owns the best attacking line-up of this season and will be hoping to bag a three pointer from their final fixture to climb a couple of spots if possible. The past 10 fixtures of Ajax shows them remaining unbeaten in 7. with enough of unbeaten recordings, they will be having decent spirits to enter this fixture.

Meanwhile, Graafschap are currently at the 9th spot of the table, at the edge of the safe zone. They are three points away from the safe zone and their chances of acquiring it is quite impossible. Therefore, they will be hoping to sum up their Eerste Divisie season with a positive display.

Graafschap recorded a 1-1 draw against Jong PSV at home in their most recent league fixture. It was their fourth winless outcome in the past 5 league fixtures.

Jong Ajax have been enjoying a strong form at home of late. They won seven of the past 10 league fixtures at home. We can also see them scoring two or more goals in each of their past 7 home outings.

On the other side, Graafschap are winless in 5 of the past 10 league fixtures on road. The positive side is, they have succeeded in scoring enough of goals while travelling.

Analyzing all the above stats, we are of the view that Jong Ajax might be scoring two or more against this Graafschap who might score at least one to find themselves in the score sheet.