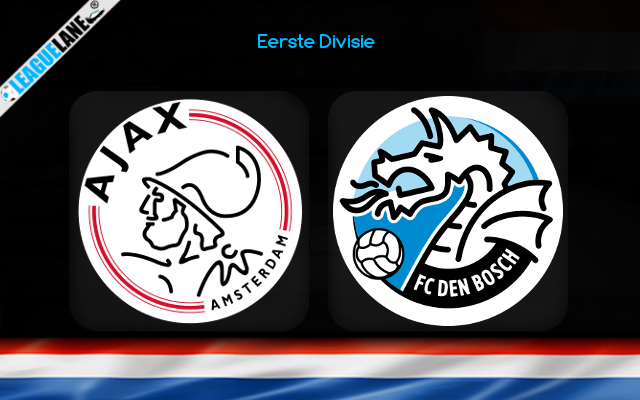 Jong Ajax and Den Bosch will drop curtain on Matchday No 22in Eerste Divisie on Monday evening at Sportcomplex De Toekmost.

The hosts will be hoping to make it 13 subsequent game without a defeat, following a 0-2 victory against Jong Utrecht on road and a 1-1 draw to Helmond at home.

Such a pair of results has increased the gap between them and the final position in safe zone to eight points. They are expecting to secure their chance to promote to Eredivisie.

Den Bosch do not have much to play in this game as they are having a long winless streak for 5 games out which they lose four. Their lack of motivation has resulted in recent drop of form as Den Bosch took only point in the last five games.

Unlike their rivals, they fell to FC Emmen at home for 0-2 which adds more to their current cold run and will enter this game with lowest spirits.

Den Bosch have not been playing defence at all in recent games. They conceded two or more goals in five consecutive matches. They have not kept a clean sheet since November end last year and just the clash against Jong Ajax.

Knowing that the hosts have scored in each of the last 20 consequent Eerste Divisie affairs, we have more than enough reasons to expect them to find the back of the net at least once here.

This game truly has goals in it and we can’t resist backing the Both Teams to Score bet @ 1.44 odds.

We don’t quite see the value in backing the non-motivated visitors. We will back Jong Ajax to score two or more goals in the game at 1.55 odds.