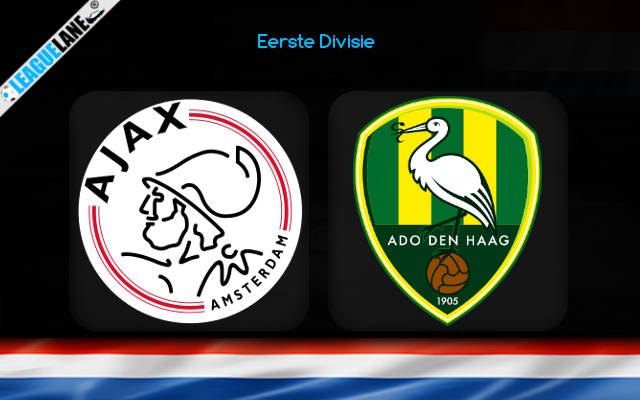 Jong Ajax have been the best reserves team in the second tier of Dutch football, this season; much like most of the seasons since they have competed in this division since 2013. Despite not being eligible for promotion the side would certainly aim to finish as high as possible.

They were last seen suffering a 2-1 defeat away from home against 2nd place team, Emmen despite having the lead at half time. The result marked their 3rd loss on the bounce.

With a couple of wins preceding that result, the club has managed to gain six points through their previous five league matches and as a result, are currently sitting 5th in the league table, thirteen points behind the league leaders.

ADO Den Haag unlike their opponents are in an intense fight for promotion. Following excellent performances towards the end of last year, the club has certainly slowed over the last two months.

They were last seen in a disappointing 2-3 loss at home against bottom half of the table club, MVV. The result marked the side’s 2nd loss in five league matches.

With seven points from their last five league matches, the club is now a point behind their opponents for Monday, with two games in hand.

Their only previous meeting ended 2-0 in favour of the De Ooievaars.

While just one of the last seven matches at this venue has witnessed more than three goals, more often than not the visitor’s away fixtures have also seen a similar score line. Hence, expect three or fewer goals from this fixture.

De Ooievaars has scored twenty goals in twenty appearances for his club this season, with three of those appearances coming from the bench. The Dutch forward has scored in the preceding five wins for the club in away fixtures and is my pick to score anytime this Monday.