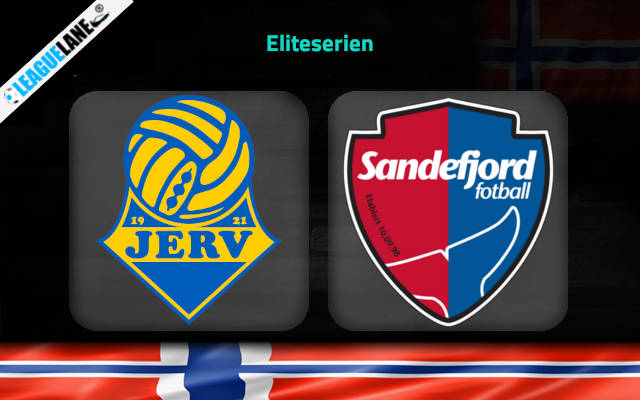 Gameweek 14 of Eliteserien is set for this weekend as the relegation fighting Jerv play host to Sandefjord where both these sides differ by 3 points and places each. These two teams will be seen clashing at J.J. Ugland Stadion – Levermyr, this Saturday.

Sandefjord is at the 11th spot on the standing with 14 points from 12 games. They won 4 times in the league while having drawn twice and have lost on 6 other occasions. Even though they concede many goals, they tend to score more of the same throughout.

The visiting side that come into this on the back of an entertaining 2-2 draw against Aalesund last week. In as many as 5 of the previous 6 clashes involving Sandefjord, a minimum of three goals have been struck.

On the other side, Jerv resides at the 15th position on the table with 11 points. Of the 13 matches played, they won 3 times in the league while having drawn twice and have lost on 8 other occasions. Residing second from the bottom, they now need 3 more points to escape the relegation zone.

Following promotion last season, Jerv come into this on the back of a 2-3 away defeat to Rosenborg last weekend. They have seen their defense breached in 5 of their previous 6 games, letting in 13 goals during that time.

Sandefjord have won 5 of their last 6 encounters with Jerv in all competitions. They now head into this weekend on the back of 4 wins from their last 5 away games. The visitors have also won back to back h2h games played at Jerv’s home.

Meanwhile, Jerv have lost 3 of their last 4 league matches played at home. There is also a good chance that we will see scoring at both ends as they have done in 4 of their last 6 meet-ups in all competitions.

Considering their previous h2h stats and current form, we feel that an away win or draw seems a realistic option.