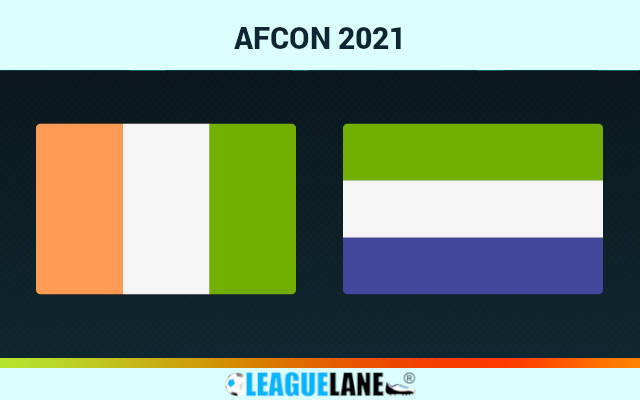 Ivory Coast have kicked off their AFCON campaign with a win in their opening fixture. A win here for the nation would put them in an excellent position leading into their clash against defending champions Algeria on match day three.

Sierra Leone pulled off an amazing result in their opening fixture by holding Algeria to a goalless draw.

The team with the morale boost they have received against Algeria would look to snatch all three points here. As their opponents are clearly a shadow of their golden generation that qualified for three consecutive World Cups.

Les Éléphants made it to the group stages of this competition following a top of the table finish in their group in the qualifiers. They finished three points clear of Ethiopia with four wins and a loss.

Having finished behind Cameroon in the WC qualifiers they have failed to make it to Qatar marking their second consecutive absence in the tournament.

Leone Stars meanwhile finished ahead of Benin on goal difference to seal their spot in this competition finishing behind Nigeria in Group L of the AFCON qualifiers.

Their 1st round exit in the WC qualifiers against Liberia means that the nation must now wait until the 2026 WC qualifiers to try and compete in their first ever World Cup.

Ranked significantly higher in the FIFA rankings Côte d’Ivoire is most likely to come away with the win.

However, despite facing weaker oppositions in recent fixtures they have failed to deliver with dominating performances, with the winning margin being higher than one just twice in their last ten fixtures across all competitions.

Furthermore, their opponents have held their own against African superpowers including the likes of Nigeria and Algeria in recent fixtures. Hence I do not see them being dominated this Sunday.

Sierra Leone have been defending with all their might in recent games conceding just thrice in their last six fixtures. Furthermore with Ivory Coast not really threatening in attack, expect a low scoring fixture.