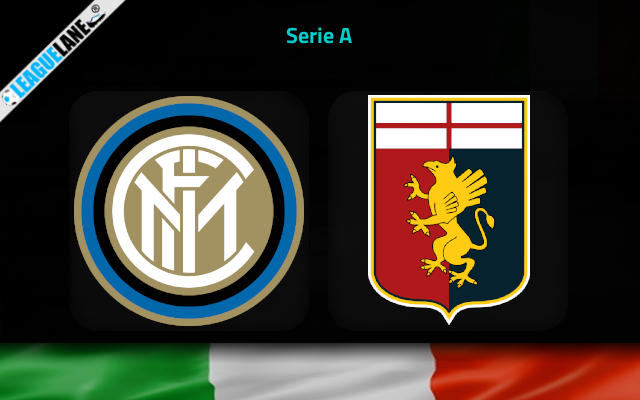 Inter will begin the title-defense quest on Saturday afternoon when Genoa come to visit Stadio Giuseppe Meazza on the opening day of the new Serie A season.

They enter the new campaign with significantly reduced ambitions following the departure of some of the main catalysts for the last season’s crown.

The team’s top scorer and best player Romelu Lukaku finally completed a long-anticipated move to Chelsea, while Antonio Conte also resigned after realizing the tough financial situation in the club ahead of this summer’s transfer window.

The former Lazio manager Simone Inzaghi took over at the helm. He can be pretty satisfied with the pre-season as Inter looked sharp all over the pitch.

The most recent acquisitions Edin Dzeko and Denzel Dumfries could arguably help the team get used to life without Lukaku and Achraf Hakimi (went to PSG in a €60 million move).

Inter will be heavy favorites to get off to a victorious start given they play host to Genoa in the first round.

The visitors have been very easy to break down in pre-season and their defensive liabilities were also exploited by lower-division Perugia in the last weekend’s Coppa Italia clash.

Davide Ballardini’s men eventually managed a 3-2 comeback against the ten-man opposition but the victory came much harder than expected (courtesy of an 88th-minute winner from substitute Yayah Kallon).

Inter Milan can also rely on tradition as they have dominated this matchup historically with 15 wins, 3 draws, and only 1 defeat in 19 clashes against Genoa at Stadio Giuseppe Meazza.

Inter have been especially dominant against Genoa in the last three years, winning each of the last six H2H encounters by at least two goals difference.

Genoa did not score a single goal in the last six meetings with Inter Milan.

A comprehensive home win is on the cards here based on everything we’ve discussed above. Inter showed beautiful football in their final pre-season exhibition against Dynamo Kyiv (a 3-0 victory) and we can easily see them bagging three or more goals past the leaky defense of Genoa’s here.

The main betting option will thus be Inter to win by two or more goals difference at the odds of 2.05.