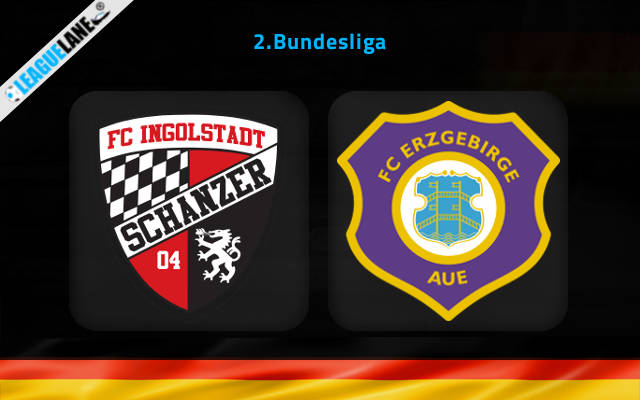 With 4 points in the difference, a battle between relegation to 3.Liga teams is set for this Friday at Audi Sportpark where Ingolstadt will be hosting Erzgebirge Aue for the 28th Round of 2.Bundesliga.

Ingolstadt resides at the rock bottom closing the 18th position on the table with a mere 15 points. Of the 27 matches played, they won only thrice in the league while drawing 6 times and losing on 18 other occasions. Their total goals to conceding ratio stands at 22:52 which is the worst in 2.Bundesliga, showcasing their dreadful lineup.

The hosts recorded their 4th consecutive league loss to Kiel by 1-0 a week ago. They have failed to prevent opponents from scoring on 5 of their previous 6 clashes, leaking 11 goals along the way.

On the contrary, Aue is just above them at 17th spot with only 19 points in hand. They also have pathetic offensive and defensive sides in the league, losing 15 of the 26 games played so far. They won only 4 times this season and have won only once of their last 14 games played across all competitions.

Since being thrashed in their last league game against Karlsruhe by 0-3 margin, Erzgebirge Aue will be hoping to turn things around here. Showing their appetite for action-packed matches, goals have been scored 21 times in the previous 6 matches where Aue has been involved. Opposition teams have managed to get 14 of those goals.

Heading into this one, Erzgebirge Aue are without a win away from home in their last 5 matches in the league. They have only won once on road this season, even after playing 12 away games.

Ingolstadt are without a win a home since the last 11 league fixtures. They however won the last 2 h2h games played at home against this foe.

The battle of these two weak sides will favour only one and we feel that he hosts are the lucky ones here.