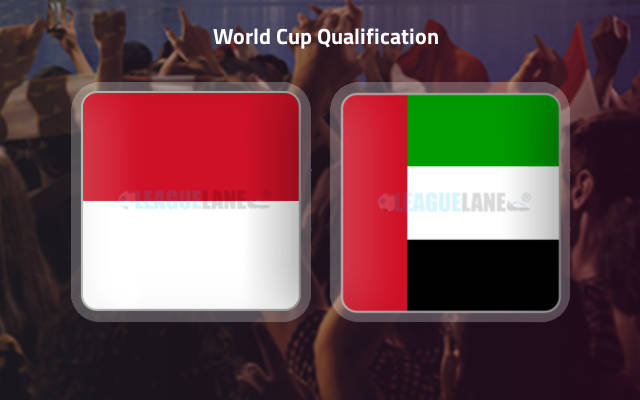 UAE take on Indonesia in Group E World Cup qualifying match, both teams desperate for three points in the race for qualification.

This group had all kinds of surprises so far and Vietnam are top with 14 points ahead of traditional heavy weights UAE and hard working Thailand.

Two points separate the Emirates from pole position and they have no other choice then to win the remaining two games.

Indonesia are eliminated after managing only 1 point this far via a draw against Thailand. Last week saw them tumbling 0-4 to East Asian rivals Vietnam and this is evidence that this team has struggled for goals as well as keeping the ball away from their penalty box.

UAE bagged an impressive 5-0 win in the reverse of the corresponding fixture.

The only other official meeting between the teams happened at the 1996 World Cup and UAE once again got the better of Indonesia with a 2-0 win.

UAE have been very inconsistent in the campaign and they are paying a heavy price for the shortcoming.

Though effective in terms of results in recent games, their finishing and composure in defense remain a major worry for head-coach Bert van Marwijk.

Thailand almost mounted a comeback from 2 goals down and their defense was consistently under threat before Muhammed Jumaa settled the nerves.

Indonesia is a lesser threat and UAE will enjoy a huge chunk of possession as well as chances inside the six yard box.

If the Emirati strikers sharpen their shooting boots, we are looking at a massive win here.