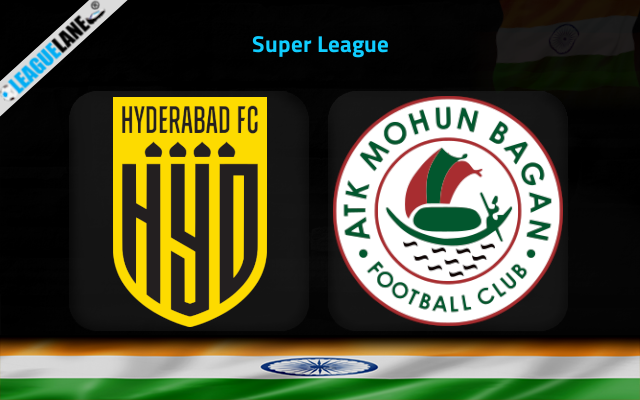 Hyderabad displayed an excellent form in the Super League season to claim the second spot on the league table. They were unbeaten in 16 of the total 20 league fixtures this season. They advanced it to the semi-finals on the back of such an impressive run.

Hyderabad ended up the league fixtures with a win against Mumbai City wearing home outfits. They have managed to record a positive display in 8 of the past 10 league fixtures. Following such a run, they will be having highest of spirits.

Meanwhile, ATK Mohun Bagan also had a strong spell of run in this Super League season. They were unbeaten in 17 of their total 20 league fixtures. They finished the season claiming the third spot on the table.

ATK Mohun Bagan recorded a zero pointer in their final league fixture against the table toppers Jamshedpur. They have managed to record 6 wins in the past 10 league fixtures. They will be motivated enough to enter the first leg match-up of the semi-final fixtures.

By the looks of things, we expect a highly competitive semi-final encounter between Hyderabad and ATK Mohun Bagan on Saturday at GMC Stadium Bambolim.

Hyderabad are unbeaten in 7 of their total 10 league affairs wearing home jersey. One of those three home defeats fro Hyderabad this season were against ATK Mohun Bagan.

We can see ATK Mohun Bagan possessing a wonderful on rod form this Super League season. They have only lost once in their total 10 league fixtures wearing away jersey.

However, we can’t predict a conclusion in favor of ATK Mohun Bagan on the back of such a set of records. Hyderabad have been enjoying an excellent spell of form in the league of late. They have a better ratio recording victories.

Therefore, we are left to back neither of these two outfits. Instead we are backing the draw option for this one.