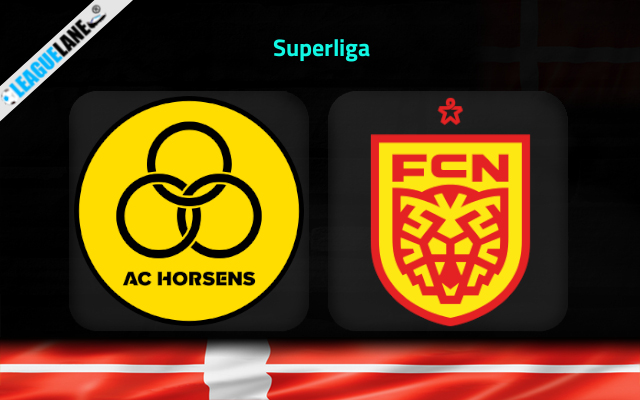 League leaders Nordsjaelland will be looking to return to winning ways as they will travel to CASA Arena Horsens to clash with Horsens.

Magnus Jensen could only manage to score a consolation in the 93rd minute when they played against Viborg. Also, the team have not kept a clean sheet in the last seven matches in all competitions.

They are currently in the seventh position in the league table. Jens Berthel Askou’s side have only won three games this season.

Meanwhile, league leaders had to settle for a point when they played against rivals Midtjylland. Ernest Nuamah scored the opening goal in the 11th minute of the game.

However, the team conceded a penalty at the last minute of the game which Evander converted into a goal.

If Flemming Steen Pedersen and his men secure a win in this match, they will have a firm grip on the top position.

The recent form is not looking decent for Yellow Dangers. They have only won a single game in their last five league outings. On the other hand, the visitors have only lost one game at the same time.

Moreover, Ernest Nuamah is on a two-game goal-scoring streak. The visitors’ last league defeat away from home came in July this year, and we can expect them to extend this record when they will play against Horsens this Friday.

Our first prediction is that the scoreline will be 2-1 for Nordsjaelland – at 9.00 odd. This is after considering the team’s excellent form in their last five matches.

Moreover, our next tip for this game is that Mads Hansen to score anytime – at 2.87 odd. So far, he has scored two goals in his last nine matches.