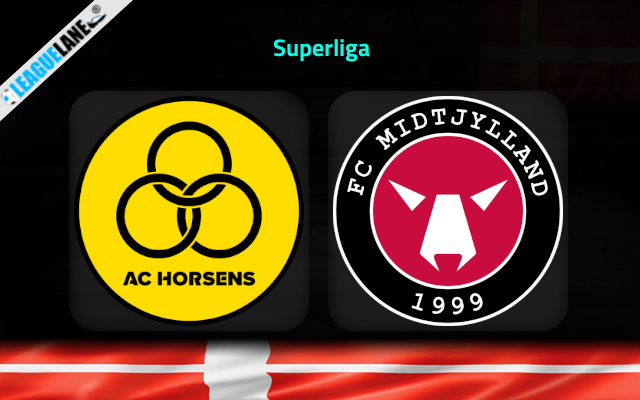 Horsens were having an impressive form throughout the past 1st Division season. As a result, they claimed the top spot at the end of the season advancing it to the top division of Denmark this year. They will be hoping to maintain a decent run this Superliga campaign.

Meanwhile, Midtjylland were having a decent run in the past Superliga season. They have recorded unbeaten displays and have succeeded in finding a safe zone spot at the end of the season. Their position allowed them to enter the Champions League qualification clash this season.

We can see Horsens have opening up this season with a positive display against FC Copenhagen. They have maintained it further by sealing another win against Lyngby from the second fixture and then recording a goalless draw against Aalborg.

But, they failed to record the same against Randers in their most recent league fixture. The 1-0 defeat have turned the above mentioned goalless draw to a winless outcome. Thus, they are now following a streak of two winless games in the league.

On the other side, Midtjylland have played some decent outfits across different competitions in their recent friendly affairs. They faced the qualification fixtures for the Champions League run post friendlies. The most recent of those was a 4-1 defeat against Benfica on the road in the semifinals.

Midtjylland follows an impressive form on the road at present. Their only competitive defeat in the past 8 away fixtures is the above mentioned first leg defeat against Benfica in the semifinals of the qualification battle.

Considering all the above stats, we are expecting a win for Midtjylland when they meet the hosting Horsens this Friday in a Superliga fixture.