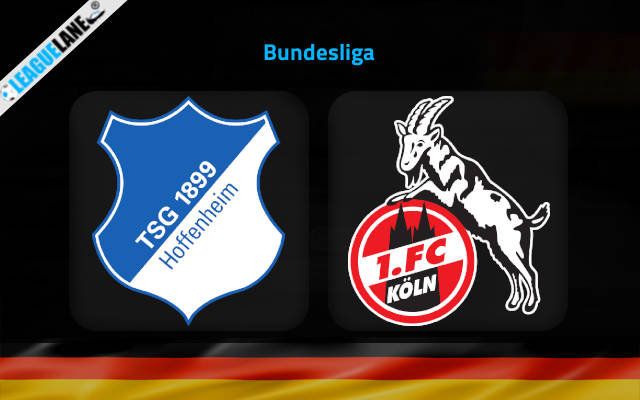 Hoffenheim take on FC Koln in Friday’s Bundesliga fixture at the Rhein-Neckar Arena. Read our Preview, Prediction and Betting Tips with Analysis here.

The hosts currently sit in 11th position in the league table with 8 points on board after 7 league games as they have lost thrice, won once and drawn once in their last 5 league games.

Hoffenheim come into this fixture on the back of a 3-1 loss against Stuttgart in a game which saw substitute, Jacob Bruun Larsen score a consolation goal.

On the other side of the field, the visitors, FC Koln currently sit in 6th position in the league table with 12 points on board after 7 league games as they have won twice and drawn thrice in their previous 5 league games this season.

FC Koln come into this fixture on the back of a 3-1 win over Furth in a game which saw Sebastian Andersson score once and Ellyes Skhiri score a brace to seal all 3 points.

Taking the above into consideration, we back the odds at 3.40 for FC Koln to claim a victory in this game.

The visitors have been showing no signs of slowing down after their impressive start to the Bundesliga campaign and on Friday, they are set to continue their strong run as the season goes on.

Consequently, we back the odds at 2.60 for the Israeli striker Dabbur to get on the score sheet anytime during the game. He will be a key part to Hoffenheim’s chances of securing a win or a point in this game.

Tips for Hoffenheim vs FC Koln