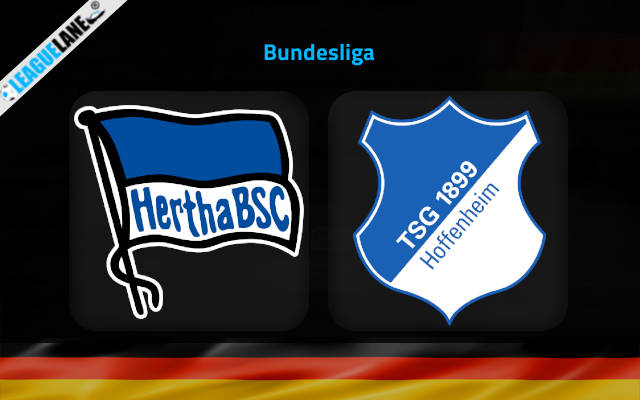 Hertha Berlin Hoffenheim in the 8th round of the new Bundesliga season on Sunday at Olympiastadion.

Hoffenheim had finished 9th in the German topflight the last season and therefore they missed out on any European competitions for this upcoming campaign.

The bookmakers see the visitors favorites for the win, pricing them at 2.30 odds to claim the win here.

It is very easy to understand that because Hertha Berlin have had a dismal start so far in the season, losing the majority of their exhibitions.

Hoffenheim are placed 4th in the table as of now. They are having an impressive form at the moment disregarding a couple of defeats they conceded in the previous round against one of the best in the German topflight, Borussia Dortmund and Monchengladbach.

Breitenreiter can be thrilled with the performance of his team’s offensive line. They scored 11 goals in the past 5 Bundesliga fixtures.

Affairs including these two have been a goal-fest in the past. Hence, we can expect an interesting affair at Olympiastadion on Sunday between the two.

The Blue Whites are yet to record a win in front of their home crowd this season. They are currently following a 6-game winless streak at this venue.

On the other hand, Hoffenheim had a pretty tough schedule to start with on the road. Their most recent fixture against Dortmund had finished in a 1-0 defeat for them. They were on the back of a 0-3 win before conceding a defeat against Dortmund.

On top of that they have an impressive head to head form against this opponent for the past several years. Thus, we expect a victory for the guests
Hoffenheim on Sunday.