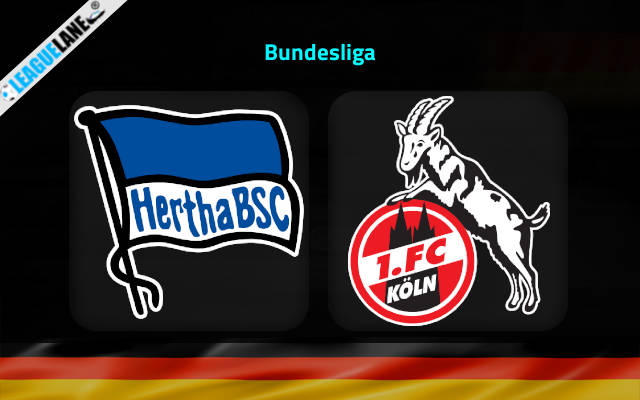 Both Hertha Berlin and Koln are counted amongst the weakest teams in the German top flight, and as one would expect their respective defenses are in a mess as well.

Hertha are placed 16th in a table of 18, and are one of the contenders to get relegated at the end of the campaign. They were able to register just two wins so far, and as of now they need a surplus of three points to climb over the relegation cut-off.

They recorded just a single win at home so far, and this sole victory came against the dead-last placed Schalke. Moreover, their only other victory this season in the Bundesliga came against the 14th placed Augsburg.

Do also note that the last they kept clean sheet at home in any competition – was back in April.

Meanwhile, Koln are placed 12th in a table of 18, and so far they were able to manage just four wins. They are on a long winless streak at the moment, and most of these fixtures ended in losses for them.

It is also to be noted that they recorded a single win on the road so far in this edition of the Bundesliga.

Furthermore, goals also came in plenty whenever these two teams locked horns in the past. Considering all these observations, expect a high-scoring affair this weekend at the Olympiastadion.

Hertha are on a losing streak at the moment, and they let in two or more goals in four of their past six match-ups. Their latest clean sheet came two months back, and their only win at this venue in the past seven months came against the dead-last placed Schalke.

On the other hand, Koln too are on a losing streak, and they let in two or more goals in all of their games in November so far.

And barring their clash against Wolfsburg, they have a 100% winless record on the road in league matches since April.