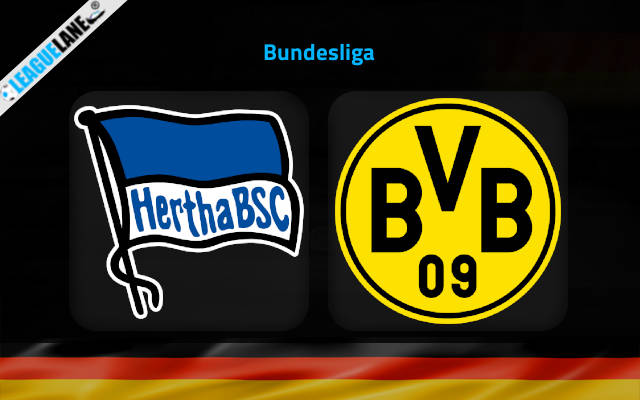 Hertha Berlin hosts Borussia Dortmund in the second game of the fourth round of the new Bundesliga season on Saturday afternoon at Olympiastadion.

The bookmakers see the visitors favorites for the win, pricing them at just 1.70 to claim the win here.

It is very easy to understand that because Hertha Berlin have had a dismal campaign in the off-season losing the majority of their exhibitions this summer.

Dortmund will go into the fourth round on the back of two wins and a defeat from the previous rounds. They have scored six and leaked four in the process. It is not the brightest start for Terzic’s men.

They have been one of the absolute best teams in the Bundesliga for the past several years and they have secured a second place finish the last time around. The expectations one them weren’t balanced by their appearances so far this campaign.

Going on they have a decent streak lately. Except for a defeat, they were unbeaten in majority of the fixtures in the past.

However, Hertha have a poor head to head record against this opponent over the years. Taking into account all these observations it is expected that we are about to witness a victory for Dortmund this Saturday.

Dortmund are on a 6-game winning run away from home and all of them were impressive high-scoring wins.

On the other side, Hertha Berlin is on a 4-game winless run in front of their home crowd.

Considering all the above stats, expect a victory for Borussia Dortmund when they meet the hosts Hertha Berlin the coming Sunday.