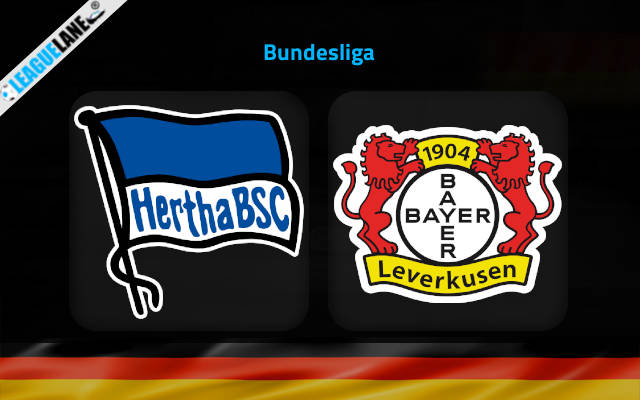 Hertha Berlin hosts Bayer Leverkusen in the sixth round of the new Bundesliga season on Saturday at Olympiastadion.

Bayer Leverkusen had finished 3rd in the German top flight. They will be taking part in the Champions League this season and they really did earn their place in the tournament. Meanwhile, Hertha Berlin had a disappointing season the last time and they were lucky to have avoided the relegation.

The bookmakers see the visitors favorites for the win, pricing them at just 1.70 to claim the win here.

It is very easy to understand that because Hertha Berlin have had a dismal campaign in the off-season losing the majority of their exhibitions this summer.

Despite of their impressive previous season displays, Bayer Leverkusen have not been able to recreate it this time so far.

Leverkusen lost 4 of the 5 league fixtures they have appeared so far this campaign. The problem for the team lies in it’s defensive line which allowed two or more goals in 3 of the previous 4 fixtures.

Leverkusen left a much better impression in the past round as they won 0-3 over Mainz on the road. They were on the back of a three game losing streak before sealing the above mentioned win.

On the other hand, Hertha Berlin are on a 4-game winless run in front of their home crowd. They are struggling to show positive consistency in the league.

Both the outfits have won just once so far this campaign and considering these observations we expect a win for the visitors on Saturday, while you can also go with the Over 2.5 Goals and Both Teams to Score bet at the 1.72 odds.