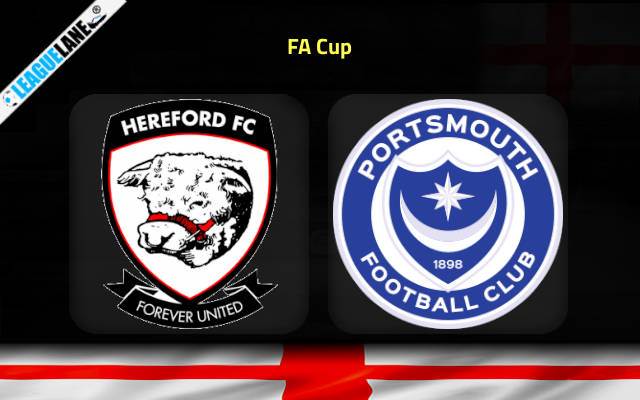 Portsmouth will be at Edgar Street on Friday for the FA Cup fixture with home team Hereford.

Hereford, who play in England National League North, will not have an easy task on Friday. Because their opponents are current fifth placed Portsmouth in League One.

Going on, Hereford is currently 11th in the National League. The lack of an impressive offensive and defensive line will affect their chances in sealing a win from this fixture.

The bookmakers see the visitors as pretty big favorites for the win, pricing them at just 1.33 odds to claim the spoils here.

It is very easy to understand why because they have a better competitive exposure and they play in a much stronger competition than Hereford.

Moreover, Portsmouth head into this game with a clean sheet win against Forest Green in their last away game. But Hereford have failed to win four of their last eight home games.

Therefore, the chances of winning will be higher for the visiting side. By the looks of things, expect a victory for Portsmouth on Friday when they lock horns with Hereford.

Portsmouth is currently on an unbeaten streak of three games. All three were League One fixtures. Against opponents like Hereford, such a stat will boost their chances of victory.

Also, Portsmouth who tend to score goals in the first half, can expect to maintain that trend in this game. Also, at least two goals can be expected from them.

Therefore, we like to back the HT/FT: Portsmouth at the 1.90 Odds as the main bet while placing Portsmouth to Score in Both Halves as the second.