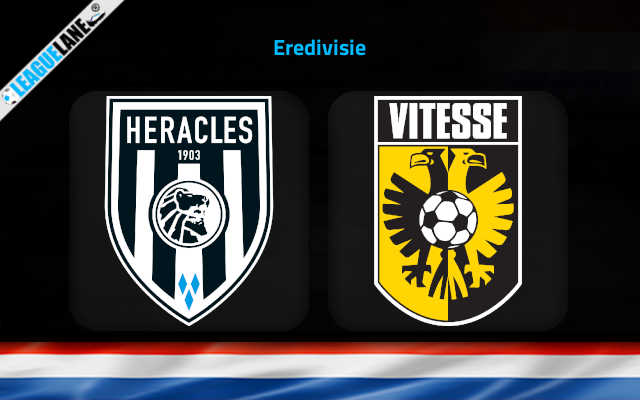 Vitesse produced their best performance of the season two weeks ago when they demolished NEC Nijmegen 4-1 at home.

The team led by German manager Thomas Letsch were not in action last weekend as their clash against Sparta Rotterdam got postponed.

They thus had an extra week of rest ahead of two tough clashes against Roma (on Thursday night in UEFA Europa Conference League) and Heracles (on Sunday in the 26th round of Eredivisie).

Vitese have generally raised the level of their game in the last couple of matches they played. They advanced to the last 16 round of UEFA Europa Conference League after a 2-0 victory over Austrian side Rapid Vienna on February 24th.

The problem for Letsch ahead of this trip is Vitesse’s form on travels. The visitors lost three and drew one of the last four matches on the road in all competitions, conceding eleven goals in the process.

Heracles also show much better displays at home than on the road in general this season. They have thus lost just one of the last eleven outings across competitions in Almelo.

Frank Wormuth’s men have been very tough to break down in their own backyard lately, allowing just two goals in the last four league games at Erve Asito.

This match thus comes at a tricky moment for Vitesse as they have to travel to Almelo less than three days after a tough Conference League match against Italian giants Roma.

Knowing how bad Vitesse have been on travels lately, we are not quite confident in their positive result on Sunday, regardless of the strong performance in the 4-1 drubbing of NEC Nijmegen in their previous league action.

Heracles kept back-to-back clean sheets in the last two home fixtures in the league and we believe they have what it takes to keep this a low-scoring tie.