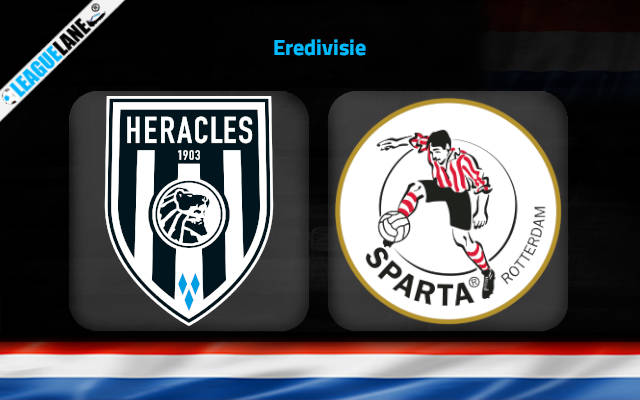 After losing the last 2 league games in a row, Heracles will be hoping to end the season with a win. They will be hosting Sparta Rotterdam at Erve Asito this Sunday.

Heracles Almelo is at the 14th spot on the standing with 34 points from 33 games. They won 9 times in the league while drew on 7 and lost on 17 other occasions. They had fired blanks in 12 games this season and that is 38% of games where they have not been able to find the back of the net. The hosts are only 3 points safe from the drop zone.

The hosts won’t want a repeat of their last result here after the 2-0 Eredivisie defeat last time out to RKC Waalwijk. That was their second consecutive defeat after Willem II. Under three goals per match were recorded in 5 of the past 6 fixtures where they have taken part.

On the other hand, Sparta Rotterdam resides just below at the 15th position on the table with 32 points. Of the 33 matches played, they won 7 times in the league while drew on 11 and lost on 15 other occasions. They really need to win here in order to escape from relegation.

Sparta Rotterdam head into the clash after a 2-0 league win over FC Zwolle in their last game. Maurice Steijn’s men have fired home 6 times in the course of their previous 6 matches. The overall goals that have been scored against them during the same comes to 7.

Sparta Rotterdam won only 3 away games this season out of the overall 16. But they has put together a good run of form as of recent and are now on a 3-game unbeaten run.

Meanwhile, Heracles are winless against this visitors in their previous 4 matches in the league. They are also without a win at home for the past 3 league matches.

Considering their past 4 league draws and taking into account the visitor’s current form, we envisage a Draw or win for Sparta Rotterdam this Sunday.