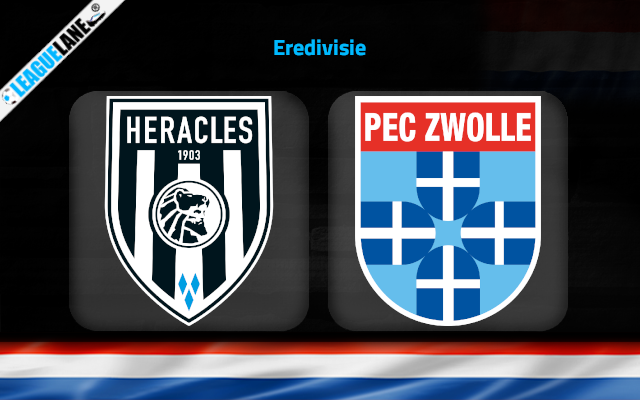 Heracles are following an inconsistent form since the beginning of this league. Being inconsistent, their current position is not secured and they are just four points clear from the danger zone. A win is a must for them further now to find a secure spot on the league table.

They have collected only four points from their past 5 league fixtures. They lost their most recent league fixture on road against Alkmaar. They conceded 2 goals while scoring 1 in that match. They possess a decent attacking and an average defensive lineup.

Meanwhile, PEC Zwolle are struggling for collecting points inside the relegation spot. They sits at the rock bottom of the league table and have been recording impressive displays in the league of late.

They are unbeaten in each of their past five league fixtures and have recorded a positive display in three of those fixtures. They have an impressive form considering their position and will enter this fixture with highest of spirits.

By the looks of things, we expect a tight affair at Erve Asito when travelling PEC Zwolle meets Heracles in the 24th Round of Eredivisie on Sunday. We expect goals from either sides as both these teams looks capable of scoring.

They both looks to have equal strength when analyzing their recent head to head results. PEC Zwolle have been recording impressive displays with consistency and they seems to have enough capability to evade a defeat in this fixture.

On the other side, the hosts follows four straight unbeaten games at home. However, they have leaked goals in four of the past 5 league fixtures at home.