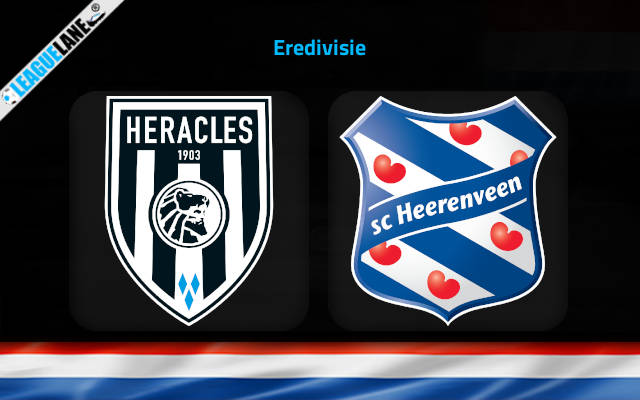 Heracles have done an excellent job in the recent home outings. They also defended well away at Utrecht last weekend but lost only after shipping the stoppage-time goal (1-0).

Since Heerenveen also kept the likes of PSV Eindhoven to a low-scoring draw last time out, backing the Under 2.5 goals FT seems as a legit betting option at the odds of 2.00 here.

Heracles lost Heerenveen in the last Eredivisie game of the day on Saturday at Erve Asito. The hosts will be hoping to maintain their fine home form, while Heerenveen are looking to stay unbeaten in fourth consecutive game on the occasion.

Heracles sit fifth from bottom in the Eredivisie table at the moment. However, it is very important to distinguish their performances at home and on the road this season.

While they took only one point from six away outings in this term of the Eredivisie, Frank Wormuth’s troops managed four wins in seven home fixtures.

Heracles have done particularly well on the home patch in the last couple of months. They won four and drew one of the last five league outings in their own backyard.

The lone draw came against the likes of Ajax in late-October. On the other side, we have Hereneveen who are undefeated in three successive games.

However, Heerenveen have also won just one of the last six Eredivisie outings and we don’t quite rate their chances of a result in Almelo.

Tips for Heracles vs Heerenveen