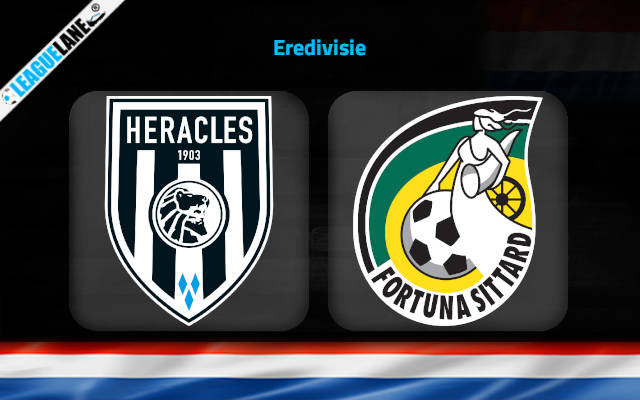 Sitting at the 2nd last position on the Group table, a much needed victory is is need for Sittard as they are close to getting relegated. A previous loss to Twente has also made Frank Wormuth to come up with a better result in the upcoming fixture as they had lost 3 of the 5 back to back games.

From the past 5 games on the table, both the teams have lost 3 games, with the number of draws and wins stand at one. Recent form of both teams is not upto the mark.

The visitors stand at the 17th spot with only 2 wins from 11 matches. They only have 9 points with 3 draws and 6 defeats.

The previous 2 losses from PSV and G.A. Eagles has alone conceded about 7 goals. Their conceding ratio is 1 goal away from reaching twice the number of scored goals.

The hosts reside at the 13th spot with 3 wins, 6 losses and 2 draws. They are only above 2 points on the table from the guests. Their previous game was ended at 1-0 defeat to Twente.

At least 1 first half goal has been scored in 82% of Fortuna’s league games this season.

Heracles haven’t been defeated in their previous 4 home league matches while Sittard fails to secure an away win for the past 7 league games.

We highly back up the the hosts since they play more possession football and has an edge while considering h2h matches. Also, they perform great at home than at away meetings.