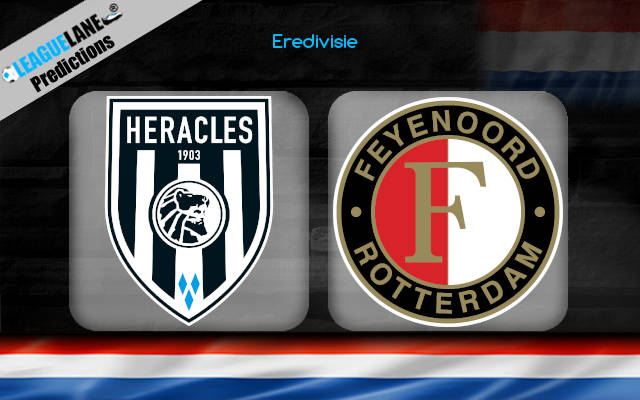 Heracles and Feyenoord could likely play each other in the Dutch UEFA Conference League playoffs in post-season. They are about to square off in the penultimate round of the regular campaign on Thursday afternoon in Almelo.

While Feyenoord are trying to avoid the Conference League playoffs by catching the 4th-placed Vitesse who are five points away ahead of the final two games, Heracles want to get in there, being currently just outside the top eight in the Eredivisie standings.

Heracles will rely on a fabulous home form as well as Feyenoord’s lack of defensive stability in the last couple of fixtures.

The hosts bagged four goals in each of the last two games at Erve Asito, without conceding a single at the opposite end along the way.

Frank Wormuth’s troops won six of the last nine home matches in Eredivisie, a streak that has helped them get into the battle for European football after all.

Feyenoord have all but lost the battle for the fourth-place finish after losing back-to-back fixtures against ADO Den Haag and Ajax in the last two rounds.

The Rotterdam giants conceded three goals in each of these two defeats. The loss to bitter rivals Ajax was especially painful as Feyenoord entered the second half with an extra man on the pitch only to have their own player sent off at the hour-mark.

Dick Advocaat’s troops have now received a red card in three successive Eredivisie matches. If they get one here, they might be in huge trouble knowing how lethal Heracles have been in the final third of late.

Feyenoord have been the dominant force in the history of this match-up. They won 22, drew 8, and lost 4 of the last 34 games against Heracles.

Feyenoord celebrated a 3-2 victory when the two teams met each other in the last 16 round of KNVB Beker in January.

Both teams scored in four of the last five head to head encounters.

Feyenoord have not been pulling up any trees of late and we can hardly recognize any value in backing them to snatch the spoils against the in-form opposition. Heracles are thus well worth backing to win the match at the attractive 3.60 odds.