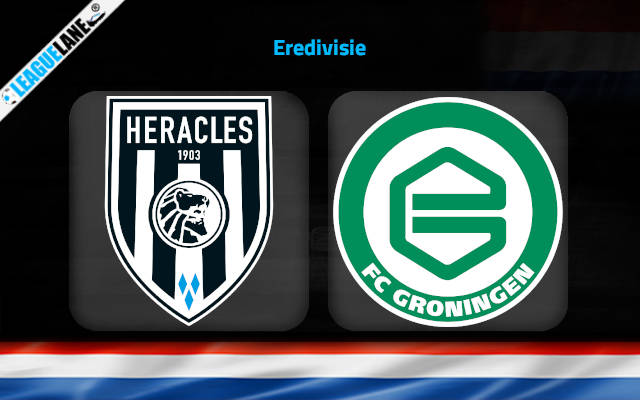 After spending most of the season near the relegation zone Groningen with a few crucial points in recent games are now sitting in a mid-table position.

Heracles meanwhile are in terrible form and are edging ever so close to the relegation zone.

These teams are set to lock horns at Erve Asito in Almelo this Saturday in an Eredivisie fixture. Read our Preview, Predictions, and Betting Tips with Analysis here.

Heraclieden managed to grab 10 points in their opening 7 league fixtures. A measly 4 points since have landed them in the 14th position in the league. The side will go into the fixture with a 4 match losing streak.

Groningen finished in the top half of the table last season. The side however struggled in the early proceeding of the campaign as they managed just a win in their opening 9 league fixtures. The club has since won thrice and will go into the fixture undefeated in 5 league matches.

They currently occupy 11th place in the table and are 7 points clear of the relegation zone.

The hosts have led at half time just twice this season. The visitors meanwhile have scored 10 of their total 18 goals this season within the first half. Hence they are most likely to have the lead at halftime.

The teams have the 2nd and 4th least goal tally by any team in the Eredivisie this season. With such weak attacking prowess of the teams involved and taking their h2h record into consideration, the fixture may not see more than 2 goals.