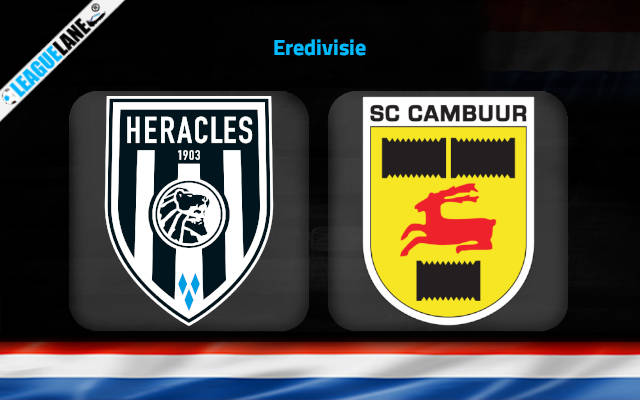 SC Cambuur is at the brink of getting into Eredivisie Conference League play offs while Heracles are just a spot away from getting into the relegation zone.

After a string of losses, a win from the previous fixture helped the hosts to take a quick breath.

Being in a mixed form of wins and losses, the visitors take an outing this Wednesday to Erve Asito to face the hosts in the 18th Round.

The Yellow-Blues is at the 8th spot on the standing with 27 points from 17 games. They won on 9 fixtures while drawing in none and losing on 8 other occasions. They have scored 31 in total while conceding a sum of 38 which shows a serious improvement in defense is needed.

Cambuur scored 11 while conceded 15 from the last 6 appearances with sharing 3 wins and losses each out of those 6 fixtures. Their previous league game ended in a defeat to Heerenveen by 1-2.

Heracles Almelo reside at the 14th position on the table with 17 points in hand. Of the 17 matches played, they won only on 5 games while drawing twice. They lost on 10 occasions with total goals to conceding ratio standing at 20:25.

The hosts have been scored against in 6 of their previous 6 games, letting in 12 goals on the way. They are far from perfect in terms of defensive aspects of the game. After 5 back to back losses, they finally gained a victory in the previous league fixture against Groningen by 4-2.

Even though the recent form of Heracles makes for a very bad reading with 4 defeats in the last 5 games. There will be some hike of confidence, while the home team also make sure that they do not end up losing too many matches at home.

The lack of goals from Cambuur at away fixtures makes this game a good candidate for a stalemate. Therefore, a possible draw is likely to happen at Erve Asito this midweek.