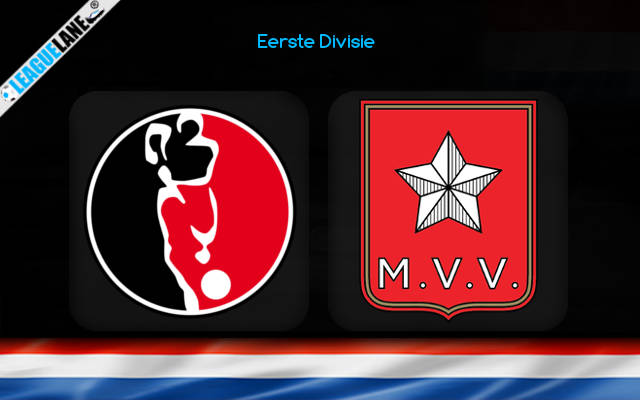 Game week 33 of Eerste Divisie brings us the match between Helmond Sport and MVV on Friday at Helmond.

Helmond Sport has not played well in their matches throughout the season. From the last ten matches, the team has two wins, one draw and seven losses. Helmond has lost in more matches than both their win and draws combined. The team now sits dead last on the league table with 24 points from their matches.

Helmond Sport played their last match against Excelsior. Excelsior scored three goals in the match and defended their post well, leaving Helmond goalless in the match. The match ended with 0-3 FT score.

Maastricht MVV has performed poorly in their matches throughout the season. They too have lost in more matches than their wins and draws combined. From the last ten matches, the team has won in two and lost in eight. MVV currently stands third from the bottom of the table with 29 points from their matches.

Maastricht MVV played their last match against Almere City, in which Almere scored three goals while Almere could score none, ending the match in a loss for MVV.

Both Helmond and MVV have performed similarly in their matches this season. Both of them have lost in more matches than both their wins and draws combined. They have also scored under 1.5 goals in most of their recent matches.

Helmond Sport’s home matches have not been as productive as they had hoped for. They have only one win to show from their last ten home matches. Similarly, MVV’s away matches have also brought poor results for the team as well.

I believe the match is most likely to end in a win for MVV or in a draw. Both teams have not gone over 1.5 goals in most of their recent matches. So, we can expect both teams to score in the match, but the scoreboard might stay under 2.5 goals.