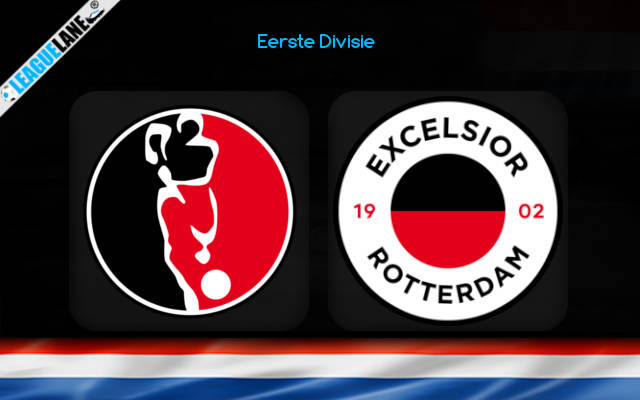 Helmond have conceded at least two goals in four of the last five matches in all competitions. They are up against the best attacking line in the competition and we are not quite confident regarding their chances of a positive outcome here.

The most efficient team in the division will take on the competition’s worst attacking line on Friday evening as Excelsior travel to SolarUnie Stadion to battle Helmond Sport in the 16th round of the Eerste Divisie.

Excelsior will come into the match off the back of an eventful eight-goal thriller that ended in a 4-4 draw against Almere City.

They had the a two-goal cushion on a couple of occasions in the game but eventually had to save a point with a late equalizer after conceding three goals in quick succession midway through the second half.

The team led by Marinus Dijkhuizen are thus two points shy of leaders Volendam at the moment.

They will get a nice chance to rebound right and on Friday given the opposition comes in the likes of the out-of-form Helmond Sport.

Helmond sit fourth from bottom having scored just 14 goals in 15 league outings so far in the season.

The hosts have been in a poor shape of late, losing three and drawing one of the last five Eerste Divisie clashes.

The draw came last weekend when Helmond Sport found a way to hold Top Oss to a goalless game in the previous round of the competition.