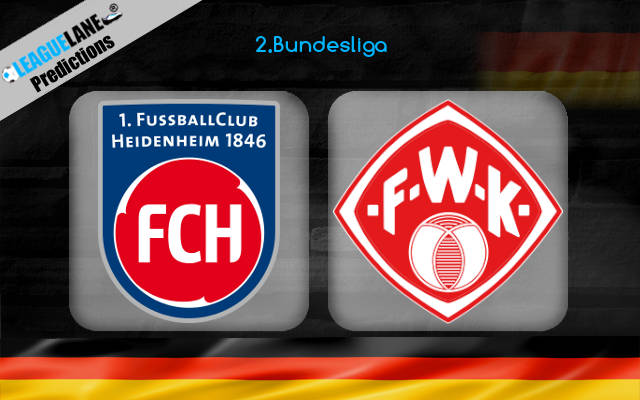 Heidenheim welcome Wurzburger Kickers for Friday’s 2.Bundesliga clash, a match both teams want to win to find a way out of the relegation zone.

Heidenheim since starting the season with a win here against Braunschweig went on to pick just 2 draws from the next 5 losing 3 times. However, they remain unbeaten at home with the latest 2 games at this stadium ending in stalemates.

Whereas, the newly promoted Kickers are yet to win a game as the number of points in the table suggest and lost 5 of the 6 so far.

The lone competitive meeting between the two sides happened in the 2016/17 2.Bundesliga season and the games resulted in away wins, first Kickers at Heidenheim 2-1 and then 2-0 at Wurzburg.

Heidenheim are the better side on both form and paper, but they are yet to come good this season.

It is worth noting that Heidenheim finished third in the league last season and denied ticket to Bundesliga on away goal rule after drawing the play-offs against Werder Bremen.

And Wurzburg already lost 5 of their 6 games so far and struggled to score goals. Therefore the home win offers good value for punters and this can be backed at 1.60 odd.

Goals will be at a premium as well, since both teams scored a combined 11 goals from the 12 games they played in the 2020/21 season.