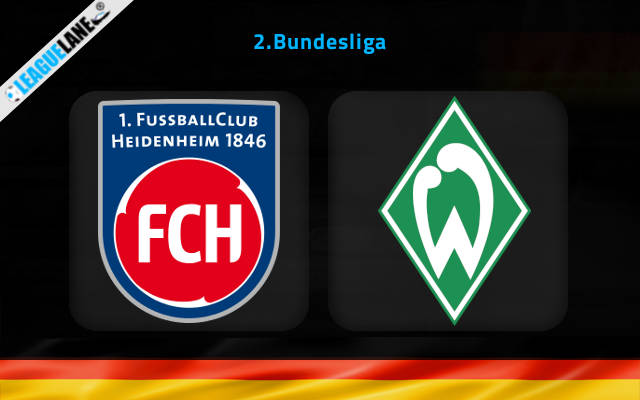 Leading the tier-2 of German Football, Werder Bremen has never tasted defeat for the last 3-month period across any venues. They are also exceptional on road, currently holding a 5-game winning streak as of recent. Heidenheim’s last league loss marked their fourth game in a row without seeing a victory. However, the hosts are second in the league when considering the home performance. With 9 points and 5 places apart, The Green-Whites will travel to Heidenheim at Voith-Arena this Saturday for the 26th Round of 2. Bundesliga.

The Green-Whites are at top flight in 2. Bundesliga with 48 points from 25 games. They won 14 times in the league while drawing on 6 and losing on 5 other fixtures. They have scored 49 goals in total while conceding quite often marking 34.

Bremen won back to back league fixtures against Hamburger SV and Dresden. They have seen their frailties exposed in defense as they have been scored against on all of their last 6 games, conceding 9 goals in all.

On the other side, the hosts reside at the 7th position on the table with 39 points. Of the 25 matches played, they won 11 games while drawing on 6 and losing on 8 other occasions.

Heidenheim lost the last league fixture by 2-3 against Darmstadt. They have been scored against on 5 of their previous 6 clashes, leaking 8 goals on the way. They have succeeded in scoring at least once from their last 9 consecutive home games across all competitions.

Coming into this fixture, Heidenheim are undefeated in their previous 6 league matches at home while Bremen are unbeaten in their last 5 league games on road. Since both teams are strong in their own standards, and on considering their past h2h stats, we anticipate a win for Bremen in this upcoming fixture.